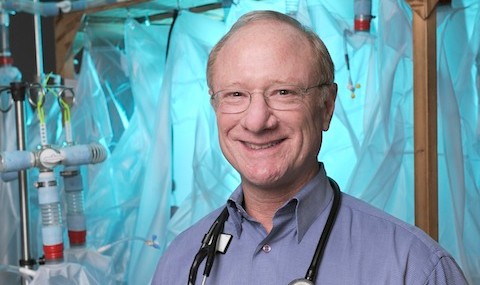 “Dr. Levine’s work has important implications for both aging and exercise training,” said UT Southwestern President Dr. Daniel K. Podolsky, who also is a member of the AAP. “We are pleased that a clinician-scientist as deserving as Dr. Levine has been chosen for this honor. He exemplifies the highest ideals of academic medicine, with a strong commitment to clinical care, research, and education.”

Dr. Levine is Director of the Institute for Exercise and Environmental Medicine (IEEM), operated jointly by UT Southwestern and Texas Health Presbyterian Hospital Dallas. He also is a longtime consultant to NASA. In 2010, Dr. Levine and two NASA flight surgeons created a medical plan that successfully helped 33 Chilean miners reach the surface without fainting after they were trapped 2,300 feet below ground for more than two months.

In addition to his research at the IEEM, Dr. Levine is a consulting physician at UT Southwestern University Hospitals and at Presbyterian. For several weeks each year, he works as an attending physician at Parkland Memorial Hospital’s Coronary Care Unit, helping to train the next generation of cardiovascular clinicians.

“It is a tremendous honor to be selected as a member of the Association of American Physicians, one of the great medical societies,” Dr. Levine said. “The AAP is dedicated to the pursuit of medical knowledge, and the advancement – through experimentation and discovery – of basic and clinical science and the application to clinical medicine. Many of the most renowned names in medicine have been members of this organization, including a number from UT Southwestern.” Founded in 1885 by seven physicians, the AAP now has more than 1,300 active members and 600 emeritus and honorary members from the U.S., Canada, and other countries. Each year, individuals having attained excellence in the AAP’s goals are recognized by election to the organization at the AAP annual meeting. Dr. Levine becomes the twentieth member of the UT Southwestern faculty to be recognized by election to this society. A graduate of Brown University and Harvard Medical School, Dr. Levine completed his internship and residency at Stanford University. In 1985-86, he studied environmental physiology at Shinshu University in Japan as a Henry Luce Foundation Scholar, followed by six months of field experience in high-altitude medicine as a physician with the Himalayan Rescue Association near Mount Everest in Nepal, where the rescue of an injured climber was featured in a National Geographic television documentary. Dr. Levine came to UT Southwestern in 1987 as a dual clinical fellow in cardiology and as a research fellow in cardiovascular/exercise physiology and space medicine. He joined the UT Southwestern faculty in 1990 and became founding director of the IEEM in 1992.

He also conducted research for the U.S. Olympic Committee for many years to understand the effects of sea-level and high-altitude training on endurance athletes – investigations that led to revisions in the international training standards used by elite athletes around the world.

In clinical medicine, Dr. Levine is interested in conditions that affect the body’s ability to regulate blood pressure, such as a debilitating syndrome called postural orthostatic tachycardia syndrome (POTS), which causes fainting due to rapid heartbeat (tachycardia) and low blood pressure upon standing. His research on treating POTS, which affects nearly 500,000 young women in the U.S., is similar to what happens to about two-thirds of astronauts returning to Earth’s gravity after space missions, and has informed the protocols used to avoid loss of consciousness and treat patients with syncope and orthostatic intolerance of diverse causes, he explained.

Dr. Levine stressed that he still has much work to do. “Personally, I remain committed to studying the adaptive capacity of circulation, and bringing advances learned in our physiology lab to patients – a form of personalized medicine that we call ‘physiomics,’ ” he added.