A mutli-site study offers paramedics a better tool for treating seizures -- autoinjectors were found to be a safe, effective alternative to giving drugs by IV. 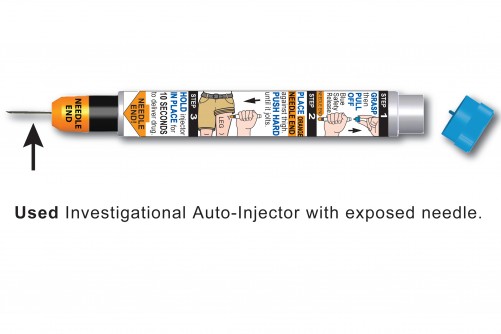 Autoinjector used in the RAMPART study. 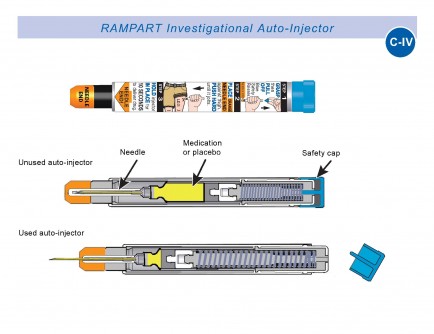 Internal view of autoinjector used in the RAMPART study.

Newswise — Drug delivery into muscle using an autoinjector, akin to the EpiPen used to treat serious allergic reactions, is faster and may be a more effective way to stop status epilepticus, a prolonged seizure lasting longer than five minutes, according to a study sponsored by the National Institutes of Health. Status epilepticus is a potentially life-threatening emergency that causes 55,000 deaths each year. Anticonvulsant drugs are typically delivered intravenously (IV) as a first-line treatment.

Starting an IV in a patient experiencing seizures can pose a challenge for paramedics and waste precious time. Giving an intramuscular shot is easier, faster, and more reliable, especially in patients having convulsions. The researchers sought to determine whether an intramuscular injection, which quickly delivers anticonvulsant medicine into a patient’s thigh muscle, is as safe and effective as giving medicine directly into a vein. The study, which was carried out by paramedics, compared how well delivery by each method stopped patients’ seizures by the time the ambulance arrived at the emergency department.

The investigators compared two medicines known to be effective in controlling seizures, midazolam and lorazepam. Both are benzodiazepines, a class of sedating anticonvulsant drugs. Midazolam was a candidate for injection because it is rapidly absorbed from muscle. But lorazepam must be given by IV. The study found that 73 percent of patients in the group receiving midazolam were seizure-free upon arrival at the hospital, compared to 63 percent of patients who received IV treatment with lorazepam. Patients treated with midazolam were also less likely to require hospitalization than those receiving IV lorazepam. Among those admitted, both groups had similarly low rates of recurrent seizures. The study appears in the Feb. 16, 2012 issue of The New England Journal of Medicine.

“Patients with status epilepticus can suffer severe consequences if seizures are not stopped quickly. This study establishes that rapid intramuscular injection of an anticonvulsant drug is safe and effective,” said Walter Koroshetz, M.D., deputy director of the National Institute of Neurological Disorders and Stroke (NINDS), part of the NIH, which funded the study.

The investigators said that while autoinjectors might someday be available for use by epilepsy patients and their family members, more research is required. Because of the strong sedative effect of midazolam, on-site medical supervision is now required for the safety of the patient.

The Rapid Anticonvulsant Medication Prior to Arrival Trial (RAMPART) study was conducted through the NINDS’ Neurological Emergencies Treatment Trials (NETT) network. Additional funding was provided by the NIH Countermeasures Against Chemical Threats (NIH CounterACT) program and the Biomedical Advanced Research and Development Authority (BARDA). The Department of Defense’s Chemical Biological Medical Systems (CBMS) Joint Project Management Office provided the autoinjectors for the trial under a Memorandum of Agreement with NINDS.

NIH CounterACT, BARDA and CBMS are responsible for enhancing the U.S. government’s development of medical countermeasures to natural and intentional public health threats (please see full statement below on CBMS). The chemical defense community has a longstanding interest in research on the rapid treatment of nerve agent-induced seizures. As the RAMPART study was being planned, investigators learned that the departments of Defense and Health and Human Services were already working with a midazolam autoinjector and the study was an opportunity to confirm its effectiveness in patients with seizures.

“There was great synergy when we realized that RAMPART was studying a similar problem that was of concern to the chemical defense community. This led to a perfect collaboration between HHS and DoD,” said David Jett, Ph.D., program director for NIH CounterACT and NINDS. “The broader implication of RAMPART is that we now have critical information from studies in humans that a safe and effective tool may one day be available to enhance our public health preparedness. Autoinjectors provide a highly practical way to treat hundreds of people quickly during an emergency.”

RAMPART is the first randomized clinical trial to investigate whether intramuscular delivery of midazolam is as effective as IV lorazepam, the current standard of care therapy. The trial started in 2009 and completed enrollment in June, 2011. RAMPART involved more than 79 hospitals, 33 emergency medical services agencies, more than 4,000 paramedics and 893 patients ranging in age from several months old to 103. The network of investigators that designed and carried out the trial was established by NINDS to conduct clinical trials on a variety of acute conditions affecting the brain such as stroke and traumatic brain injury. NETT investigators are organized into a system of 17 major research hospitals each of which is linked to several community hospitals and other medical centers.

Another special aspect of the study was that it was conducted under exception from informed consent for emergency research. This is a federal regulation to protect patients who are involved in research when consent is not possible because of their medical condition. Community consultation is held in advance of the study to raise awareness, ensure transparency, and get input from local residents.

Paramedics in RAMPART used study boxes with a time-stamped voice recorder, designed by the NETT team. This tool allowed paramedics to make quick decisions, indicate the time treatment began and the time the patient’s convulsions stopped, all without having to interrupt patient care to record data. The goal of the study was to control the seizures within 10 minutes without having to deliver a second dose of medicine. Prolonged status epilepticus can last for hours and sometimes is controlled only with general anesthesia.

“Few other areas of medicine are as time-dependent as injury to the brain. In epilepsy, even a few minutes can be important. With every minute the seizure continues, it becomes harder to stop. RAMPART offers first responders an important treatment tool that will have a meaningful impact on the lives of many people with epilepsy,” said Robert Silbergleit, M.D., of the University of Michigan in Ann Arbor, first author of the NEJM paper.

NINDS (www.ninds.nih.gov) is the nation’s leading funder of research on the brain and nervous system. The NINDS mission is to reduce the burden of neurological disease – a burden borne by every age group, by every segment of society, by people all over the world.

CounterACT (www.ninds.nih.gov/counteract) is supported by the NIH Office of the Director and the program funds research on developing therapeutics and diagnostic technologies that will reduce mortality and morbidity during and after chemical emergency events.

About CBMS:JPM-CBMS, one of eight joint project management offices within the Joint Program Executive Office for Chemical and Biological Defense, is responsible for research, development, acquisition, fielding, and life cycle management of U.S. Food and Drug Administration (FDA) approved/cleared medical systems for protection, treatment, and diagnostic capabilities against chemical, biological, radiological, and nuclear (CBRN) warfare threat agents. All CBRN medical countermeasures are approved by and regulated through the FDA. CBMS is composed of a headquarters and three Joint Product Management Offices: The Joint Vaccine Acquisition Program, the Medical Identification and Treatment Systems, and Biosurveillance (provisional). For more information, visit www.jpeocbd.osd.mil

About the National Institutes of Health (NIH):NIH, the nation's medical research agency, includes 27 Institutes and Centers and is a component of the U.S. Department of Health and Human Services. NIH is the primary federal agency conducting and supporting basic, clinical, and translational medical research, and is investigating the causes, treatments, and cures for both common and rare diseases. For more information about NIH and its programs, visit www.nih.gov. 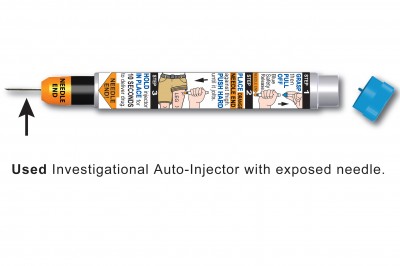 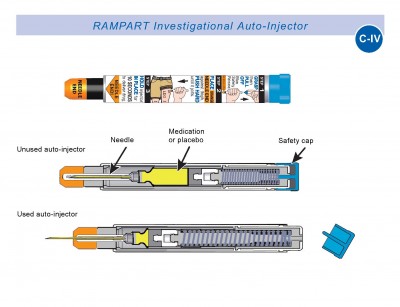 Caption: Internal view of autoinjector used in the RAMPART study.