University of Delaware researchers are working to combat wooden breast syndrome, a disease that afflicts chickens. 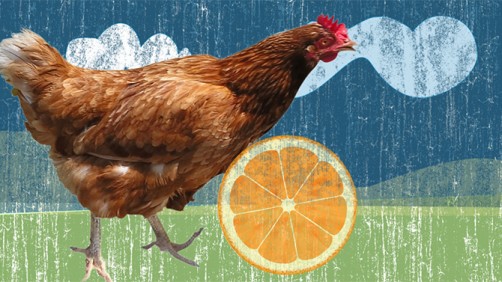 Newswise — Wooden breast syndrome can affect broiler chickens, making the meat hard and chewy, rendering the birds unmarketable. Although it poses no threat to human health, wooden breast can cause significant economic losses for growers, who sometimes see the disease in up to half their flocks.

That’s a big concern in the U.S., which leads the world in broiler chicken production, and elsewhere around the globe, where chicken increasingly is being relied upon as a high-quality source of protein.

University of Delaware researchers are working to combat the disease. They’ve been analyzing the genes involved in wooden breast disease and have identified biomarkers for the disorder. Also, as reported recently in the journal PLOS One, they have determined the unique biochemistry of the hardened breast tissue. Such findings are expected to help advance new diagnostics and treatments for the disorder.

The research is led by Behnam Abasht, assistant professor in the Department of Animal and Food Sciences in UD’s College of Agriculture and Natural Resources (CANR).

Birds afflicted with wooden breast are easy to identify. “The disease manifests itself exactly as the name implies, making a chicken’s breast extremely tough and with the feel of wood,” Abasht said.

The disease also may cause issues such as white striping, in which white lines are visible parallel to the muscle fibers — a condition that may decrease the nutritional content.

With improvements in poultry production over the past 50 years leading to increased muscle yield and growth rate in chickens, Abasht said he wanted to see if these production gains could also be increasing the rate and development of new muscle disorders.

One of the first ways Abasht and his team looked at the problem was by studying all of the genes expressed in chicken breast tissue to get an understanding of the underlying biological mechanisms contributing to the disease.

By constructing complementary DNA information from five affected and six unaffected breast muscle samples from a line of commercial broiler chickens, the team compared their gene list to previously published histology findings on the disorder.

“From over 11,000 genes with a detectable expression in the tissue, we found that around 1,500 genes are significantly different between these two groups, the healthy and the affected,” said Abasht. “Once we had the list, we did a functional analysis to find out where those genes belong — do they belong to specific pathways or specific cellular functions? We were trying to make sense of the genes and what they tell us.

“What we found is that there may be localized hypoxia — a lower oxygen concentration in the affected tissues. In addition, our findings strongly suggest presence of oxidative stress — when free radicals build up and there aren’t enough antioxidants to detoxify them — as well as an increase in calcium in the tissue cells.”

Since there has been limited research on the recently emerged disorder, the team wasn’t sure what to expect and had little to compare their results to.

“By using advanced technology such as RNA sequencing we were able to characterize the general profile of this disease, which was a key first step in the research process,” said Marie Mutryn, who graduated in 2015 and did her master’s thesis on the disease. “I was very lucky to be able to study such a novel disease at UD as a master’s student, and I really felt like I was able to make an impact to help the poultry industry combat this disease.”

Building on the gene expression data, the team started to identify biomarkers likely to be associated with wooden breast incidence and severity.

Using a subset of the genes found in the previous study, the team quantified the expression levels of 204 genes in 96 broiler chickens.

These biomarkers can now be used to accurately classify commercial chickens with or without the disease, as well as to potentially indicate its severity.

“This work will directly impact the health and well-being of over 500 million broiler chickens raised in the Delmarva region each year,” said Erin Brannick, director of the CANR Comparative Pathology Laboratory, assistant professor in the Department of Animal and Food Sciences, and a veterinary pathologist who was a collaborator on the research. “It truly underscores the purpose of the land grant institution to apply cutting-edge research techniques to real-world agricultural problems.”

“There were lots of similarities in the results of this work and the gene expression work that really confirmed each other,” Abasht said. “The results confirmed that there’s oxidative stress in affected muscles.”

Supplementing poultry diets with vitamin C, a potent antioxidant, may help lower the incidence of the disorder, Abasht said, and is the subject of future research.

The researchers also studied 2,500 broiler chickens raised under commercial conditions for 29 days to study their feed efficiency until market age at 47 days.

The results showed a significant statistical difference between healthy and affected chickens, with the affected chickens having a larger breast muscle, higher body weight and greater feed efficiency.

But that’s not the case every time. “You can still find chickens that aren’t as efficient and have a relatively smaller breast muscle, yet they have the disease,” Abasht said.

UD researchers are currently studying the onset and early course of this disease through funding supports made by Arthur W. Perdue Foundation and U.S. Poultry and Egg Association.

Going forward, the U.S. Department of Agriculture recently funded a $500,000 research grant proposal (Grant No. 2016-67015-25027), which is a collaboration between UD, Iowa State University and Ohio State University, that aims to further characterize the genetic basis of wooden breast. Abasht will serve as the principal investigator on the project.