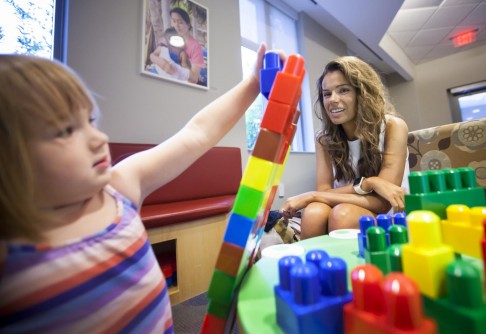 "Our work may contribute to the understanding of the nature of mathematics," says Emory University psychologist Stella Lourenco, shown meeting with a young visitor to the Emory Child Study Center.

Newswise — Spatial reasoning measured in infancy predicts how children do at math at four years of age, finds a new study published in Psychological Science.

"We've provided the earliest documented evidence for a relationship between spatial reasoning and math ability," says Emory University psychologist Stella Lourenco, whose lab conducted the research. "We've shown that spatial reasoning beginning early in life, as young as six months of age, predicts both the continuity of this ability and mathematical development."

Emory graduate student Jillian Lauer is co-author of the study.

The researchers controlled the longitudinal study for general cognitive abilities of the children, including measures such as vocabulary, working memory, short-term spatial memory and processing speed.

"Our results suggest that it's not just a matter of smarter infants becoming smarter four-year-olds," Lourenco says. "Instead, we believe that we've honed in on something specific about early spatial reasoning and math ability."

The findings may help explain why some people embrace math while others feel they are bad at it and avoid it. "We know that spatial reasoning is a malleable skill that can be improved with training," Lourenco says. "One possibility is that more focus should be put on spatial reasoning in early math education."

Previous research has shown that superior spatial aptitude at 13 years of age predicts professional and creative accomplishments in the fields of science, technology, engineering and math more than 30 years later.

To explore whether individual differences in spatial aptitude are present earlier, Lourenco's lab tested 63 infants, ages six months to 13 months, for a visual-spatial skill known as mental transformation, or the ability to transform and rotate objects in "mental space." Mental transformation is considered a hallmark of spatial intelligence.

The researchers showed the babies a series of paired video streams. Both streams presented a series of two matching shapes, similar to Tetris tile pieces, which changed orientation in each presentation. In one of the video streams, the two shapes in every third presentation rotated to become mirror images. In the other video stream, the shapes only appeared in non-mirror orientations. Eye tracking technology recorded which video stream the infants looked at, and for how long.

This type of experiment is called a change-detection paradigm. "Babies have been shown to prefer novelty," Lourenco explains. "If they can engage in mental transformation and detect that the pieces occasionally rotate into a mirror position, that's interesting to them because of the novelty."

Eye-tracking technology allowed the researchers to measure where the babies looked, and for how long. As a group, the infants looked significantly longer at the video stream with mirror images, but there were individual differences in the amount of time they looked at it.

Fifty-three of the children, or 84 percent of the original sample, returned at age four to complete the longitudinal study. The participants were again tested for mental transformation ability, along with mastery of simple symbolic math concepts. The results showed that the children who spent more time looking at the mirror stream of images as infants maintained these higher mental transformation abilities at age four, and also performed better on the math problems.

High-level symbolic math came relatively late in human evolution. Previous research has suggested that symbolic math may have co-opted circuits of the brain involved in spatial reasoning as a foundation to build on.

In addition to helping improve regular early math education, the finding could help in the design of interventions for children with math disabilities. Dyscalculia, for example, is a developmental disorder that interferes with doing even simple arithmetic.

"Dyscalculia has an estimated prevalence of five to seven percent, which is roughly the same as dyslexia," Lourenco says. "Dyscalculia, however, has generally received less attention, despite math's importance to our technological world."