Baby spiders really are watching you

The vision of jumping spiders is nearly as keen in babies as adults, a University of Cincinnati study found 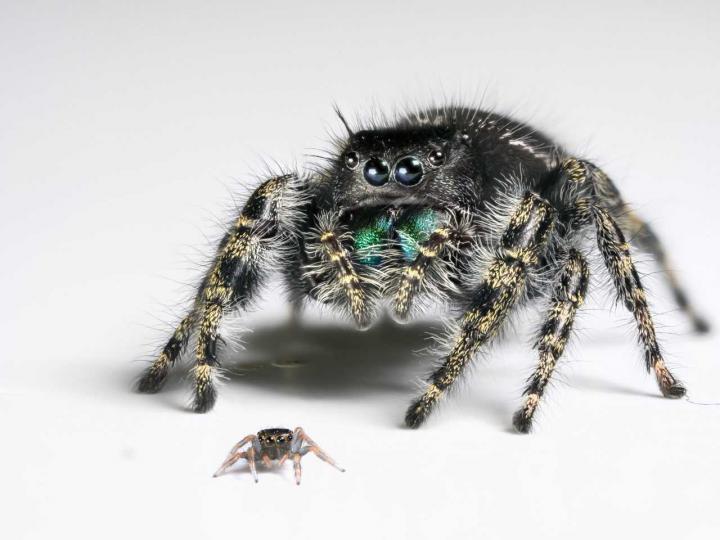 This is a jumping spider. 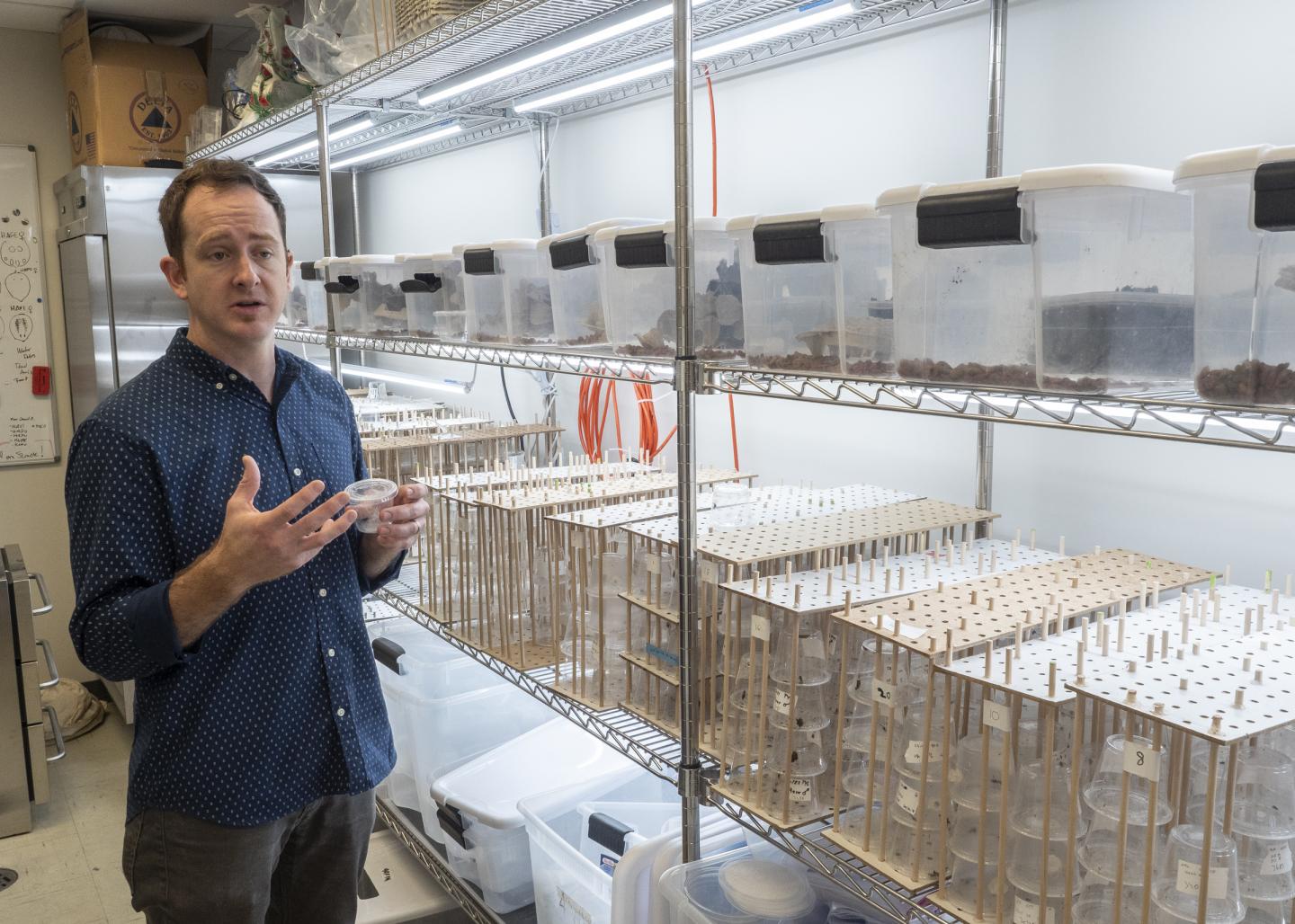 UC biologist Nathan Morehouse stands in his lab surrounded by hundreds of little spiders in plastic habitats. Morehouse is studying the vision of jumping spiders around the world.

Newswise — Baby jumping spiders can hunt prey just like their parents do because they have vision nearly as good.

A study published in the journal Vision Research helps explain how animals the size of a bread crumb fit all the complex architecture of adult eyes into a much tinier package.

"Spiderlings can adopt prey-specific hunting strategies. They can solve problems. They're clever about navigating their environment," said Nathan Morehouse, a biologist with the University of Cincinnati. "This suggests their eyes are providing as much high-quality information when they're small as when they're large. And that was a puzzle.

"We thought the adults were pressing the limits of what was physically possible with vision. And then you have babies that are a hundredth that size," Morehouse said. "That makes us wonder how they're accomplishing all of this?"

"For humans, it takes three to five years before babies can reach the visual acuity of adults," Gote said. "Jumping spiders achieve this as soon as they exit the nest.

The research found that baby spiders have the same number of photoreceptors as adults but packed differently to fit in a smaller space. These 8,000 photoreceptors are smaller than those found in the adults. And many of these cells are shaped like a long cylinder to fit more of them side by side to maintain the visual acuity that helps spiders distinguish objects at a distance.

Morehouse said it's not just the number but the placement of these photoreceptors in the eyes that help an animal make sense of its world.

"If you have a photoreceptor spaced every 5 degrees, you'll only see things that are more than 5 degrees apart. But if they're 1 degree apart, you can distinguish things that are closer together," he said.

"We're some of the best at this in the animal kingdom. We can tell something a meter apart more than a kilometer away," Morehouse said.

So if you looked down from the top of the Eiffel Tower, you could easily tell a person's hat from their belt, he said.

Many jumping spiders have extraordinary vision, such as tetrachromacy, the ability to see four colors (ultraviolet, red, blue and green). That's even better than our typical trichromatic vision that limits most of us to seeing variations of red, green and blue. Scientists are studying whether some people can see even more colors.

UC researchers used their custom-made micro-ophthalmoscope, similar to those used eye doctors, to peer into the tiny eyes of baby spiders.

"The hardest part is to handle these tiny, fragile creatures with utter care as to not harm them while measuring them," UC biologist Elke Buschbeck said.

Building and refining her lab's micro-ophthalmoscope took years of work, she said.

"It's a powerful, one-of-a-kind research tool that allows us to engage in several exciting projects that were not possible before," she said.

Researchers used the equipment to map the light-sensitive cells and their relationship.

"We knew the angular distance between photoreceptors to understand the spatial acuity of eyes or how the spiders can see patterns in the world and distinguish objects," Morehouse said.

They also conducted a microscopic analysis or histology of the spider eyes. Like most creatures in the animal kingdom, jumping spiders begin life with eyes that are much larger in proportion to the rest of their bodies.

"And the bigger the eye, the better it functions. The more light it captures and the more in focus objects are," Morehouse said. "So one strategy is to start life as close to your adult eye size as you can."

"People say, 'That's going to be a big dog' because of the size of the puppy's feet. A puppy grows into its feet in the same way that jumping spiders grow into their eyes," Morehouse said.

Arguably, the large eyes also make baby animals look darn cute, he said. And the fuzzy little jumping spiders with their solicitous, upturned postures already have that going for them, according to some Twitter fans.

One drawback of baby spiders' eyes is they capture less light than those of the adults. That means they can't see as well in dim conditions. This makes baby spiders conspicuous to field researchers working in the dark understory, he said.

"One thing you pick up on is spiderlings act a little drunk. They're a bit stumbly," he said. "They seem a little impaired. And it's probably because the world is a little dimmer, like you're walking through the house with the lights off bumping your shins on the furniture."

"With good science and hard work, insights can come from anywhere. Undergraduates can be part of meaningful, world-class research," Morehouse said.

Caption: This is a jumping spider.

Caption: UC biologist Nathan Morehouse stands in his lab surrounded by hundreds of little spiders in plastic habitats. Morehouse is studying the vision of jumping spiders around the world.