Background TV Can Be Bad for Kids 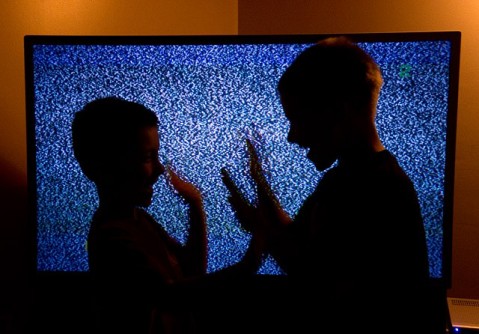 An University of Iowa researcher found that background television—when the TV is on in a room where a child is doing something other than watching—can divert a child’s attention from play and learning.

Newswise — Parents, turn off the television when your children are with you. And when you do let them watch, make sure the programs stimulate their interest in learning.

That's the advice arising from University of Iowa researchers who examined the impact of television and parenting on children’s social and emotional development. The researchers found that background television—when the TV is on in a room where a child is doing something other than watching—can divert a child’s attention from play and learning. It also found that non-educational programs can negatively affect children’s cognitive development.

“Kids are going to learn from whatever you put in front of them,” says Deborah Linebarger, associate professor in education at the UI and the lead author on the study, published online in the Journal of Developmental & Behavioral Pediatrics. “So what kinds of messages, what kinds of things do you want them to learn? That would be the kinds of media you’d purposefully expose them to.”

The findings come from a national survey of more than 1,150 families with children between 2 and 8 years old. Linebarger and her team looked at family demographics, parenting styles, media use, and how those factors could impact kids’ future success.

The team found a relationship between the content children are exposed to and their executive function, an important facet in learning and development. This was especially true among children in families she identified as “high risk”—in families living in poverty or families whose parents have little education, for example. Yet even kids in high-risk families who watched educational television saw increases in executive function, the researchers found.

Regardless of family demographics, parenting can act as a buffer against the impacts of background TV, Linebarger’s team found.

“Children whose parents create a home environment that is loving and nurturing and where rules and expectations are the same from one time to another are better able to control their behavior, display more empathy, and do better academically,” she says.In particular, Linebarger suggests that parents be mindful what their children view on the tube, especially the content of a show.

“Sit down to watch a particular show and when it’s done, turn it off,” she says.

In an earlier study, Linbarger and other UI researchers found that children, on average, are exposed to nearly four hours of background TV per day. Among the impacts of background TV, researchers say, is it recruits kids’ attention away from other activities, such as play and learning.

The paper is titled, “Associations between parenting, media use, cumulative risk, and children’s executive functioning.” Contributing authors include Rachel Barr of Georgetown University, Matthew Lapierre of the University of North Carolina at Wilmington, and Jessica Taylor Piotrowski of the University of Amsterdam.

Journal of Behavioral and Developmental Pediatrics