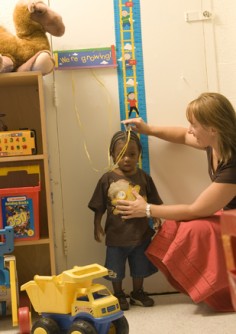 Newswise — The Johns Hopkins School of Nursing is working with Baltimore City Schools and local community foundations to strengthen parenting and parent engagement in pre-kindergarten and examining the impact of that investment on students’ later academic outcomes.

As part of a three-year funding initiative from the Harry and Jeanette Weinberg Foundation to support early childhood in Baltimore City, a group led by Deborah Gross, DNSc, RN, FAAN, of the Johns Hopkins School of Nursing (JHSON), will implement a parenting program that seeks to improve children’s behavioral outcomes and academic success and reduce the reliance on remedial and special education services later on which are costly to school systems. The initiative has received additional support from the Leonard and Helen R. Stulman and T. Rowe Price foundations.

The initiative, known as the ChiPP Project, uses tenets of the Chicago Parent Program, which Gross developed while at Rush University in Chicago through a grant from the National Institute for Nursing Research. It is a 12-session, group-based parenting skills training program that offers evidence-based strategies for encouraging good behavior and reducing misbehavior in children ages 2-5. The program is listed on the National Registry of Evidence-based Programs and Practices and is being implemented in agencies serving families in over 16 states.

In partnership with the Fund for Educational Excellence and the Baltimore City Schools Office of Engagement, Gross’ group will be implementing the program in six to 10 schools annually over the next three years. This will be the first time the program has been implemented in Maryland as part of a long-term effort to evaluate its impact on school outcomes.

Commenting on the program, Gross said, “Research shows that the strongest predictor of special education use is a child’s social, emotional, and behavioral health. And the strongest predictor of children’s social, emotional, and behavioral health isn’t family income or where you live. It is the quality of parenting that a child experiences.”

Six Baltimore City Schools have already signed on for the first year of the project: Wolfe Street Academy, Commodore John Rodgers, Liberty Elementary, Arundel Elementary, Furman Templeton Preparatory Academy, and Hamilton Elementary. Over the next three years, the ChiPP Project will expand to serve over 350 families of young children in up to 24 Baltimore City schools.

“This effort is very important given the strong commitment of the Johns Hopkins School of Nursing and community foundations to the city of Baltimore and the health of its children and families,” Gross says.

“It provides an opportunity to make a business case for schools to invest in evidence-based parenting programs during early childhood. The earlier we start, the greater the academic and financial impact.”

###The Johns Hopkins School of Nursing is a global leader in nursing research, education, and scholarship. The School and its baccalaureate, master's, PhD, and Doctor of Nursing Practice programs are recognized for excellence in educating nurses who set the highest standards for patient care and become innovative national and international leaders. Among U.S. nursing schools, the Hopkins Nursing graduate programs are ranked #1 by U.S. News & World Report. For more information, visit http://nursing.jhu.edu.