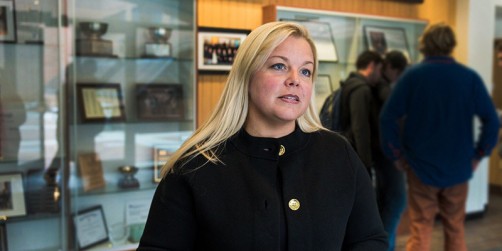 Newswise — Maybe Gordon Gekko was right when he said that information was the most valuable commodity of all. A new study showing major investment advantages for banks in countries where public economic data is scarce seems to support that claim by the fictional corporate raider in the 1987 movie Wall Street.

The study, conducted by a former Wall Streeter-turned academic, shows that banks – armed with superior access to local private information due to their extensive investments and relationships – enjoy major advantages over other investors. Direct and portfolio investors, for example, were shown to have far less access to similar information, and were consequently more hesitant to invest.

“The Effects of Information Voids on Capital Flows in Emerging Markets” in the Journal of International Business Studies, one of the top-tier business journal in the world, also reveals another major advantage enjoyed by banks: the flexibility to act on new information so they can withdraw capital immediately or invest more heavily in targeted areas.

“We argue that foreign investors differ in their sensitivity to information voids based on their own private information and their flexibility in responding rapidly to change,” says study author Allison Kingsley, an assistant professor in management at the University of Vermont who spent a decade on Wall Street with Lehman Brothers and other investment firms. “In particular, we found that foreign banks were least hampered by information voids due to their extensive networks and privileged access to private information about local conditions, and their ability to adapt quickly to new information."

In a far less advantageous position, according to the study, are direct investors that have both limited access to private information and an inability to respond quickly when faced with new information. Somewhere in between are portfolio investors who possess almost no access to local information, but the ability to liquidate quicker to “offset their ignorance.”

Kingsley says it would be easy to vilify banks based on the results of the study, but points out that that they play a vital role in infusing capital into emerging and frontier markets when others are less willing to do so. "Banks aren’t scared to invest in opaque, information-scarce countries," adds Kinglsey.

Kingsley and co-author Benjamin A.T. Graham, assistant professor of international relations at the University of Southern California, tested their hypothesis regarding the sensitivity of different investors to information voids by using cross-sectional data on local public information, and capital flows to the 30 largest emerging markets from 1994 to 2012.

Specifically, they measured analyst coverage (the number of analysts covering each country in a given year actively tracking and publishing opinions on a company and its stock) and government transparency as their primary measures of local public information. They also included investment press coverage based on the number of investment-related articles published in English in a given year.

Countries that scored the lowest on the availability of either type of local public information included Russia, Nigeria, Lebanon and Saudi Arabia. Countries with the highest levels of government transparency were either members of the European Union (EU) like Hungary, Romania, Poland and/or countries with relatively well-developed democratic political institutions like Mexico and Columbia.

Kingsley says not all countries are intentionally supressing information. Some governments simply lack the funding and ability to track and produce reliable economic data, while others choose not to for various reasons such as maintaining control over local markets.

“If I was advising a country in these turbulent times where it’s not clear who is going to win and who is going to lose, I would tell the country to release as much data as possible. I actually think that transparency will become the most effective strategy.”