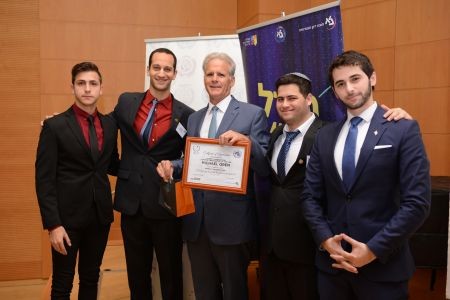 Newswise — Approximately 250 students from 13 academic institutions throughout the country participated in the national conference of the Israel Model UN Association (IMUNA) hosted by Bar-Ilan University. Looking strikingly similar to real-life UN delegates, the students, dressed in suits, simulated UN activities, sought solutions to pressing international issues, honed their negotiating skills , public speaking, research and policy-making. The aim of the organization is to train the next generation of Israeli diplomats and global leaders.

In his opening remarks regarding the importance of public diplomacy, Deputy Minister Oren Oren said, "Hamas and Hezbollah have understood that the real battle is in the propaganda arena. Israel must understand that beyond military, technology and cyber warfare, we must fight for the world's public opinion. Countries of the world vote against us at the UN. India, not long ago, supported the cancellation of Trump's Jerusalem declaration, and has already canceled a multi-million-dollar missile deal.  All this, despite the good relations Israel has with India."

"In order to preserve and strengthen our right to exist, Israel must act in the public diplomacy arena," continued Deputy Minister Oren. The great difference between Obama and Trump is that Trump sees Israel as a solution rather than a problem. Israel fought for its right to exist. We need to sharpen our battle through public diplomacy against organizations or people who oppose the existence of the State of Israel."

My generation fought wars, and our time is slowly passing. The role of the current generation is to advance Israeli diplomacy and to repair Israel's image around the world.  That is the role that I bestow upon you Model UN'ers," concluded Oren.

IMUNA President Gavriel Ben-Haim shared: "Today we have the honor of hosting Deputy Minister for Foreign Policy Dr. Michael Oren, staff from the United Nations Department of the Ministry of Foreign Affairs and from the Jewish Agency's foreign mission unit who have come to examine ways to deepen cooperation in order to advance the next generation of diplomats in Israel.

Today our students learned from Deputy Minister Oren about President Trump's way of thinking regarding Iran, North Korea, and the Israeli-Palestinian conflict, and why the measures President Trump has been carrying out lately raise, in the Minister's words, the chance of advancing a real solution, because leaders who honor their commitments contribute to credibility, which is the basis for any cooperation.

The goal of IMUNA's conferences is to create a platform that will enable potential leaders from all walks of Israeli society to learn and experience the tools of rhetoric, networking, building cooperation, and finding solutions to complex problems so that they can lead and influence reality in Israel and around the world," concluded Ben-Haim.

Students were divided into committees that dealt with finding solutions to various issues on the global agenda, such as gender violence, disarming hostile populations, and coping with ecological crises.

In addition to conferences, students of the Israeli Model UN Association participate in weekly training sessions, enrichment workshops led by senior diplomats, delegations to various countries, and various projects in cooperation with the Ministry of Foreign Affairs, foreign embassies, and the Knesset.