Bariatric Surgery Is Effective Under the Right Circumstances 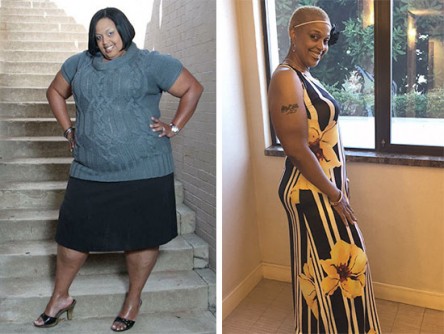 Bass, before and after surgery.

Newswise — BIRMINGHAM, Ala. — Obesity is a medical problem that can have wide-ranging mental and physical effects on a person. Pamela Bass knows that firsthand, but thanks to University of Alabama at Birmingham surgeons, she has a new lifestyle and a new state of mind.

For years, Bass struggled with weight gain and the adverse health effects that come with obesity, such as high cholesterol, diabetes and high blood pressure.

“My heaviest weight was about 415 pounds,” Bass said. “I didn’t want to live like that anymore.”

After meeting with doctors at UAB, Bass was encouraged to first try to lose weight on her own. Unfortunately, due to other medical issues, she was not able to shed any weight.

“I had a lot of fluid inside me that was overpowering what I was trying to do to lose weight,” Bass said.

After many unsuccessful attempts to lose weight on her own, Bass became a candidate for bariatric surgery.

Bariatric surgery is intended for patients who are morbidly obese and already have tried diets, exercise and other non-surgical means of losing weight. The surgery helps patients eat less through a variety of mechanisms that differ with the type of procedure done. In general, a person is a candidate for weight loss surgery if he or she has a body mass index of at least 40, although the definition varies depending on the insurance company.

Bariatric surgery is intended for patients who are morbidly obese and already have tried diets, exercise and other non-surgical means of losing weight.

“Bariatric surgery is appropriate for patients who have tried and failed other means of weight loss and meet the weight criteria for surgery,” Stahl said. “However, it is wrong to think of it as a ‘last resort.’ In addition, many think bariatric surgery is dangerous, but the mortality and morbidity rates from bariatric surgery are on par with more familiar operations like gallbladder surgery.”On April 23, 2014, Bass’ gastric bypass surgery was performed by Richard Stahl, M.D., associate professor in the Division of Gastrointestinal Surgery in the UAB Department of Surgery. While Bass’ procedure was necessary for weight loss, Stahl says there are many misconceptions about the surgery.

Stahl says many people think bariatric surgery is a last-ditch effort to save patients before they die from the ravages of obesity, but that is the wrong approach.

“Patients who have made an effort to lose weight without surgery should not be made to wait unnecessarily for surgical treatment while they try and fail several more attempts at weight loss,” he said. “Surgical intervention should not be delayed unnecessarily. Otherwise a patient’s declining health may increase their risk to a point where they are no longer a surgical candidate.”

After her procedure, Bass began to lose weight. She lost 29 pounds shortly after surgery and another 100 pounds within six months. Today she weighs 179 pounds and has controlled her high blood pressure, no longer has high cholesterol and is no longer borderline diabetic. However, the road to get there was difficult.

“Having this surgery required me to have a complete lifestyle change,” she said. “UAB provided a nutritionist and counseling because I had a hard time accepting who I was. Counseling was important for me. I had this lifesaving surgery, so I didn’t know what to expect. People need to know there are challenges after the surgery.”

Stahl echoes Bass’ statements, saying that UAB has an incredible multidisciplinary team working in conjunction with the UAB Weight Loss Medicine Clinic run by Amy Warriner, M.D., and the Division of Endocrinology in the Department of Medicine.