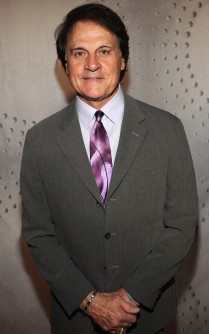 Newswise — Tony La Russa, who recently was elected to the Baseball Hall of Fame and is considered one of the best managers in baseball history, has been selected to give the 2014 Commencement address at Washington University in St. Louis, according to Chancellor Mark S. Wrighton.

The university’s 153rd Commencement ceremony will begin at 8:30 a.m. Friday, May 16, in Brookings Quadrangle on the Danforth Campus.

During the ceremony, La Russa, who is also known for his tireless animal rescue work and instilling in his players an interest in giving back to their communities, will receive an honorary doctor of humanities degree from WUSTL.

He will address approximately 2,800 members of the Class of 2014 and their friends and family members.

This will be La Russa’s third time speaking at Washington University. He delivered an Assembly Series talk in 2005 and the keynote address at the William Greenleaf Eliot Society’s 45th annual dinner in 2012.

“Washington University is honored to have Tony La Russa address the graduating class of 2014,” Wrighton said. “Although our students come from all over the country and the world, they will no doubt benefit from hearing from one of baseball’s most enduring and legendary managers and strategists.

“Tony’s philanthropic work with animal rescue is an exceptional legacy and serves to remind our young graduates that there are many different ways to make an impact on the world around them,” Wrighton said.

He will be inducted to the Baseball Hall of Fame during ceremonies July 27 in Cooperstown, N.Y., as well as to the St. Louis Cardinals Hall of Fame Museum on Aug. 16.

After managing 5,097 games, he ranks second in total number of games managed as well as number of years managing.

La Russa is the subject of two New York Times best-selling books — George Will’s 1990 “Men at Work: The Craft of Baseball” and Buzz Bissinger’s 2005 “Three Nights in August: Strategy, Heartbreak, and Joy Inside the Mind of a Manager.”

In his 2012 New York Times best-selling memoir, “One Last Strike: Fifty Years in Baseball, Ten and a Half Games Back, and One Final Championship Season,” La Russa recounts his legendary last season as manager of the St. Louis Cardinals.

La Russa, a native of Tampa, Fla., began his MLB career as a player, starting as an infielder for the Kansas City Athletics in 1963. He also played for the Atlanta Braves and the Chicago Cubs, among other teams, before finishing his playing career in the minors in 1977.

In between playing, he attended the University of South Florida, graduating in 1969 with a degree in industrial management, and Florida State University College of Law, earning a law degree in 1978. He passed the Florida bar exam in 1979, but by that time he had found his true calling in managing.

When he took over the White Sox in August 1979 at age 35, La Russa was the youngest manager in the game. Since then, he has been named manager of the year in five seasons.

After he announced his retirement on Oct. 31, 2011, Major League Baseball selected him to manage the National League team for the 2012 All-Star game in Kansas City, only the second retired manager to do so.

Currently, he is employed by Major League Baseball and is a special assistant to Commissioner Bud Selig.

Since then, the nonprofit organization has helped thousands of companion animals through a variety of programs, including adoption (more than 25,000 animals have been placed in homes), veterinary care for pets of low-income residents and low-cost spay and neuter surgeries.

La Russa serves as board chairman of ARF, whose mission has expanded to include outreach programs that promote and foster interaction between people and companion animals.

One such program uses therapy animals to provide animal-assisted activities in hospitals, schools, skilled-nursing facilities, rehab centers and adult day care facilities. Another, Pets for Vets, pairs soldiers who have returned from Iraq and Afghanistan with companionship and comfort.

La Russa also has been instrumental in the success of Cardinals Care, the St. Louis Cardinals community foundation that has distributed nearly $20 million to support St. Louis area nonprofit youth organizations, built 21 youth ball fields in local disadvantaged neighborhoods and served over 4,500 kids per season as part of the Redbird Rookies program since its inception in 1997.

The La Russas live in Alamo, Calif., and have two daughters, Bianca Tai and Devon Kai.

For more on the 2014 Commencement, visit commencement.wustl.edu.