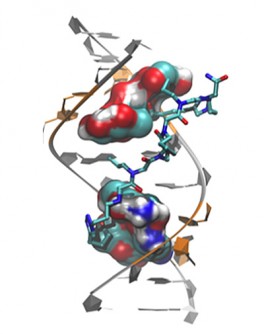 Scientists revealed a detailed image of the genetic change that causes myotonic dystrophy type 2 and used that information to design drug candidates to counteract the disease.

Newswise — This image may look complicated, but it tells a fairly straightforward tale about basic research: Learning more about basic life processes can pave the way for medical and other advances.

In this example, researchers led by Matthew Disney of the Scripps Research Institute's Florida campus focused on better understanding the structural underpinnings of myotonic dystrophy type 2 (DM2), a relatively rare, inherited form of adult-onset muscular dystrophy. The disorder is caused by a glitch in the normal process of replicating DNA that results in a gene with a kind of "stutter" in its code. This gene in turn produces an RNA molecule with an unusual, hairpin-like structure that then binds to and inactivates an essential cellular protein called MBNL1.

Drugs that target "toxic" RNA molecules like the one found in DM2 are few and far between, as developing such compounds is technically challenging. The Disney lab overcame this obstacle by taking an unconventional approach. First, the scientists determined the detailed, three-dimensional structure of the hairpin-like RNA molecule seen in DM2. Then, they used this information to design drug candidates that bind to—and mitigate the adverse effects of —the "toxic" RNA. They found that even in small amounts, these designer molecules significantly restored normal MBNL1 function in a cellular model of DM2. While this work is still in the preliminary stages, it may hold potential for someday treating the disorder.

Disney is just one of some 300,000 scientists at more than 2,500 universities, medical schools and other research institutions in every state who are working on more than 50,000 research projects funded by the National Institutes of Health. These investigators aim to improve disease diagnosis, treatment and prevention, often through increasing understanding of the biological rules of life. For instance, earlier studies on how electric fields affect bacteria led to an important cancer medicine, cisplatin. Another cancer drug, Velcade, grew out of research on a cellular garbage disposal system. Studies of how viruses infect bacteria led to the discovery of restriction enzymes, which are now a cornerstone of the biotechnology industry.

In addition to medical applications, basic research has led to some other well-known technologies. For example, freeze-drying was originally developed as a method to concentrate and preserve lab samples, laundry stain removers came from studies of digestive enzymes, and improved paternity testing resulted from a technique first developed to mass-produce specific pieces of DNA for study.