Batteries that can be assembled in ambient air 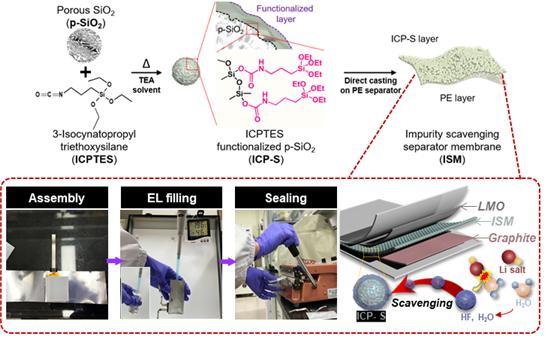 Newswise — The honor of the 2020 Nobel Prize in Chemistry went to those who developed lithium-ion rechargeable batteries. These batteries have become an essential energy source for electronic devices ranging from small IT devices to electric vehicles. Tesla, a leading U.S. automaker, recently emphasized the need to establish an innovative production system and reduce battery cost. The price of batteries accounts for a large portion of electric vehicles and cost reduction is vital to popularizing them.

A joint research team, led by Professor Soojin Park and Ph.D. candidate Hye Bin Son of POSTECH's Department of Chemistry with Professor Seungmin Yoo of Ulsan College, has successfully developed a multi-functional separator which allows the batteries to function even when the pouch cell is assembled in ambient air. These findings were introduced in the latest online edition of Energy Storage Materials.

Since the electrolyte inside the battery reacts with moisture to cause deterioration, lithium-ion batteries are typically assembled in a dry room which maintains less than 1% humidity levels. However, maintaining a dry room is rather costly.

To solve this issue, studies have been conducted to suppress impurities - such as moisture or hydrofluoric acid - by injecting additives into the electrolytes. But these can cause unwanted side reactions during the battery operation. In fact, when batteries are activated at a high temperature (50? or higher), even a small bit of moisture causes faster performance deterioration. Therefore, there is a need for a material capable of trapping moisture and impurities in the battery without adverse electrochemical reactions to the additives.

To this, the joint research team introduced functional materials that can trap impurities on the surface of the separator to increase thermal stability and improve battery performance. This multi-functional separator demonstrated excellent heat resistance (shrinkage within 10% after 30 minutes of storage at 140?. Conventional separator had 50% shrinkage) and further showed improved electrochemical performance at the high temperature of 55? (79% of the initial capacity maintained after 100 charging cycles).

Additionally, the researchers confirmed the effectiveness of the functional material in the electrolyte in the impurity-filled environment. The silane compound on the surface of the synthesized functional ceramic traps moisture and maintains the ceramic structure well, but the general ceramic material was corroded by the acidified electrolyte. Moreover, through this research, the team confirmed that this multi-functional separator produced in the ambient air this time exhibits superior lifespan than the conventional separators, confirming that it provides stable performance beyond the role of a simple separator.

"This newly developed multi-functional separator shows great stability and excellent electrochemical performance at high energy density," remarked Professor Soojin Park who has long been studying battery separators through various approaches. "With this first successful case of fabricating batteries in ambient air, it is expected to play a big role in reducing battery cost."