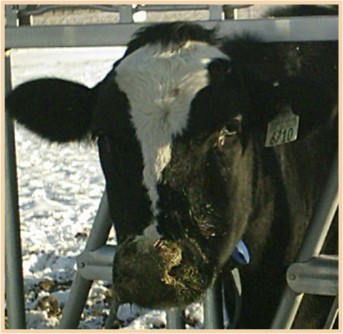 Looking at the two genomes of BVDV reveals differences in the NS23 segment between noncytopathic (NCP) and cytopathic strains. Experiments reveal that infection in utero involving the NCP genome can lead to persistently infected calves. 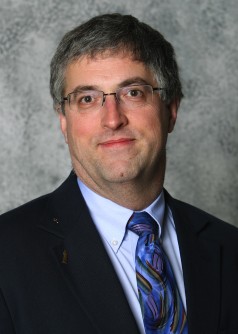 Newswise — Bovine viral diarrhea virus infections result in one of the most costly diseases among cattle with losses in U.S. herds estimated at $2 billion per year, according to professor Christopher Chase of the South Dakota State University Veterinary and Biomedical Sciences Department. “It is an immune-suppressive disease,” he explains. The virus shuts down the immune system and makes the animal vulnerable to pneumonia and other respiratory diseases. Identifying persistent infectionsWhen a pregnant cow becomes infected the developing calf is at risk. If the infection occurs between 40 and 120 days of gestation, the calf will be born persistently infected according to the U.S. Department of Agriculture. The calf appears healthy, but is what Chase refers to as a “walking time bomb” that can infect the entire herd. “It’s like Typhoid Mary, a BVDV Bossy,” he says. The animal will shed the virus for its entire life.

Approximately 0.5 percent of all cattle in the United States are persistently infected, according to Chase. Most cattle producers vaccinate yearly, but when testing is done anywhere from one to 15 percent of a herd can test positive. BVDV spreads via direct contact through nasal discharge, saliva, such as when cows drink from a tank with unchlorinated water. It can also be transmitted through semen, urine and feces and even milk.

Identifying variationsIn 2003-2004, the Antelope research station in northwestern South Dakota bought 136 cattle and wound up with 60 persistently infected calves. Of these, 26 died prior to being weaned, but the rest were brought to SDSU. The surviving calves, all of whom died of mucosal disease within a year, provided Chase and his graduate researchers “a gold mine of samples.”

Chase and his team found two viruses and one mutation. In some cases, the virus incorporated part of a cow gene or another virus in the part of the genome in which most mutations take place, Chase explains. This makes developing a vaccine to prevent the virus challenging.

Hoppe’s unique microscope setup allows the researchers to use fluorescence to see what’s happening at a molecular level in live cells. “Adam has helped devise constructs that make these cells fluorescent all the time,” Chase explains. “When certain pathways get turned on, BVDV grows even better.”

The researchers want to understand “how this persistence occurs and what can be done in regard to natural immunity,” Chase says. They surmise that different virus strains will require different vaccine strategies.

Ultimately, the best kind of immunization would be to increase the mucosal immune response, antibodies secreted on the surfaces of the throat, gastrointestinal tract and respiratory system, Chase explains.

Research performed with Colorado State University showed that the virus quickly infects Kupffer cells in the liver, which help trigger the body’s immune response. This discovery may help the scientists figure out how persistence occurs, according to Chase. This may then lead to developing ways to prevent the virus from infecting the fetus and creating a persistently infected animal that is a threat to the entire herd.

About The Department of Veterinary and Biomedical Sciences The Department of Veterinary and Biomedical Sciences has an extensive research program focused on the pathogenesis, diagnosis, and prevention of infectious diseases of domestic animals and humans. Currently, our research program encompasses approximately 12 faculty and adjunct faculty, and 20–30 graduate students. Research groups focus on basic questions of immunology, molecular vaccines, viral and bacterial pathogenesis. They collaborate regionally, nationally and internationally with both academic and industry-based researchers to isolate mechanisms of pathogenesis, develop novel vaccine strategies against infectious agents of animals and humans, and develop new diagnostics for emerging diseases.

The work of the university is carried out on a residential campus in Brookings, at sites in Sioux Falls, Pierre and Rapid City, and through Cooperative Extension offices and Agricultural Experiment Station research sites across the state