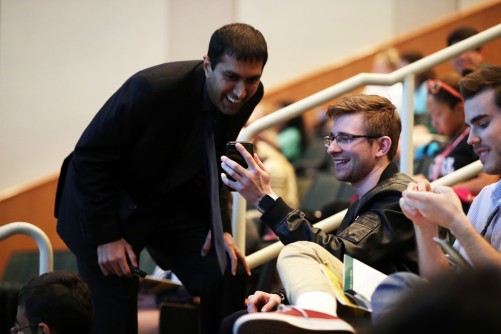 Baylor University has named Neil K. Garg, Ph.D., professor of chemistry at UCLA, as the 2018 recipient of the Robert Foster Cherry Award for Great Teaching.

The Cherry Award is the only national teaching award – with the single largest monetary reward of $250,000 – presented by a college or university to an individual for exceptional teaching. The award program is designed to honor great teachers, stimulate discussion in the academy about the value of teaching and encourage departments and institutions to recognize their own great teachers. Along with a record of distinguished scholarship, individuals nominated for the Cherry Award have proven themselves as extraordinary teachers with positive, inspiring and long-lasting effects on students.

"The selection committee for the Robert Foster Cherry Award for Great Teaching was very pleased with the strength of the nomination pool for the 2018 award. Each of the three finalists had successful campus visits in the fall, during which they were able to present a public lecture and guest lecture in two undergraduate classes offered by their host departments," said Michael W. Thompson, Ph.D., committee chair and associate dean for undergraduate programs in Baylor's School of Engineering and Computer Science.

“Dr. Garg’s teaching is transformational and combines traditional methods with innovations, such as his widely viewed BACON – Biology And Chemistry Online Notes – modules, to inspire students to learn about the difficult subject of organic chemistry while simultaneously developing students’ critical thinking and problem-solving skills,” Thompson said.

As the 2018 Cherry Award recipient, Garg will receive the $250,000 award and an additional $25,000 for the chemistry department at UCLA. He is expected to teach in residence at Baylor during the spring 2019 semester.

Garg was named a finalist, along with fellow distinguished teacher/scholars Heidi G. Elmendorf, Ph.D., associate professor of biology, Georgetown University, and Clinton O. Longenecker, Ph.D., Distinguished University Professor of Leadership, The University of Toledo. As Cherry Award finalists, each received $15,000, while their home departments also received $10,000 for the development of teaching skills.

“Competing for the Cherry Award at Baylor University was one of the most fun – and, to be honest, stressful – experiences of my career,” Garg said. “I was greatly honored to be named a finalist in the company of two exceptional professors, Clinton Longenecker and Heidi Elmendorf, and am still rather shocked and humbled by the ultimate outcome of the competition. I would like to express my deep gratitude and admiration to Baylor University, whose efforts to strengthen undergraduate education are truly extraordinary. As honored as I am to receive the prestigious Cherry Award, I believe the award is really a tribute to the thousands of brilliant UCLA students I have taught over the years.”

Garg visited Baylor in October 2017 to present his Cherry finalist lecture, “How Organic Chemistry Became One of UCLA’s Most Popular Classes.” In that public lecture, he discussed the underlying teaching philosophies that have transformed his organic chemistry class from a typical “weed-out” course to one of the most popular classes on UCLA’s campus. Garg examined chemistry’s reputation and discussed how his use of music videos and online tutorials has transformed the course’s popularity.

Garg has developed, with six of his former undergraduate students, a new smartphone app called “Backside Attack” that is fun, free and educational. It teaches organic chemistry concepts in a creative and interactive way. The app teaches the first reaction many students learn in organic chemistry: the bimolecular substitution reaction known as SN2. In this reaction, a molecule approaches another molecule from its backside to initiate the reaction. Players navigate through several topics and, through interactive game play, learn how changes in chemical structure affect reaction rates. The fundamental concepts taught through Backside Attack are applicable to many other organic chemistry reactions.

The professor and his daughters, Elaina, 10, and Kaylie, 6, published the Organic Coloring Book in 2017 to help children learn the wonders of organic chemistry.

"Neil Garg’s students have said for years that he is the best professor they have ever had and ever will have; they won’t be at all surprised to learn he has won our country’s most important award for outstanding university teaching,” said Miguel García-Garibay, dean of the UCLA Division of Physical Sciences and professor of chemistry and biochemistry.

Garg has earned numerous awards for his teaching and research, including California’s U.S. Professor of the Year Award from the Carnegie Foundation for the Advancement of Teaching in 2015 and the Elias J. Corey Award for Outstanding Original Contribution in Organic Synthesis in 2017. He was named a Fellow of the Royal Society of Chemistry and received the group’s Merck Award in 2016. He received a Guggenheim Fellowship that year as well.

Garg’s research specializes in the field of synthetic organic chemistry. His research group has made breakthroughs that have solved long-standing problems in chemistry, and much of the chemistry he and his colleagues have discovered is now used by practitioners in the pharmaceutical industry seeking to make the medicines of tomorrow. He has published more than 75 peer-reviewed scientific manuscripts and two patents while at UCLA, and he has been invited to give more than 170 lectures worldwide. Garg is a popular teacher of undergraduate-level organic chemistry and challenges his students to overcome their pre-fabricated perceptions of the subject. He is known to engage students by showing them the relevance of organic chemistry in everyday life using online tutorials and giving them the opportunity to create organic chemistry music videos, all while teaching them to solve extraordinarily difficult problems. His class is one of the most popular classes at UCLA and was featured in the magazine LA Weekly as being one of the best in the city of Los Angeles.

ABOUT THE ROBERT FOSTER CHERRY AWARD