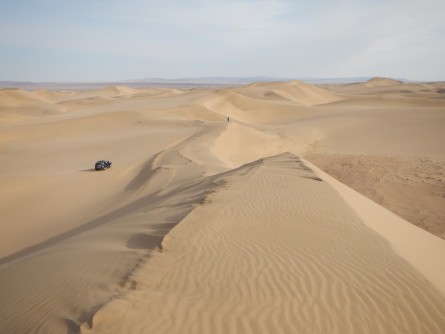 Newswise — WACO, Texas (Feb. 17, 2015) — Using a relatively new scientific dating technique, a Baylor University geologist and a team of international researchers were able to document—for the first time—a drastic climate change 4,200 years ago in northern China that affected vegetation and led to mass migration from the area.

Steve Forman, Ph.D., professor of geology in the College of Arts & Sciences, and researchers—using a dating technique called Optically Stimulated Luminescence—uncovered the first evidence of a severe decrease in precipitation on the freshwater lake system in China’s Hunshandake Sandy Lands. The impact of this extreme climate change led to desertification—or drying of the region—and the mass migration of northern China’s Neolithic cultures.

Their research findings appear in the January 2015 issue of the Proceedings of the National Academy of Sciences and are available online.

“With our unique scientific capabilities, we are able to assert with confidence that a quick change in climate drastically changed precipitation in this area, although, further study needs to be conducted to understand why this change occurred,” Forman said.

Between 2001 and 2014, the researchers investigated sediment sections throughout the Hunshandake and were able to determine that a sudden and irreversible shift in the monsoon system led to the abrupt drying of the Hunshandake resulting in complications for the population.

“This disruption of the water flow significantly impacted human activities in the region and limited water availability. The consequences of a rapid climatic shift on the Hunshandake herding and agricultural cultures were likely catastrophic,” Forman said.

He said these climatic changes and drying of the Hunshandake continue to adversely impact the current population today. The Hunshandake remains arid and even with massive rehabilitation efforts will unlikely regrow dense vegetation.

“This study has far-reaching implications for understanding how populations respond and adapt to drastic climate change,” Forman said.

Forman is the director of the Geoluminescence Dating Research Lab in the department of geology.

ABOUT BAYLOR UNIVERSITY Baylor University is a private Christian University and a nationally ranked research institution, characterized as having “high research activity” by the Carnegie Foundation for the Advancement of Teaching. The University provides a vibrant campus community for approximately 15,000 students by blending interdisciplinary research with an international reputation for educational excellence and a faculty commitment to teaching and scholarship. Chartered in 1845 by the Republic of Texas through the efforts of Baptist pioneers, Baylor is the oldest continually operating University in Texas. Located in Waco, Baylor welcomes students from all 50 states and more than 80 countries to study a broad range of degrees among its 11 nationally recognized academic divisions. Baylor sponsors 19 varsity athletic teams and is a founding member of the Big 12 Conference.

The College of Arts & Sciences is Baylor University’s oldest and largest academic division, consisting of 24 academic departments and 13 academic centers and institutes. The more than 5,000 courses taught in the College span topics from art and theatre to religion, philosophy, sociology and the natural sciences. Faculty conduct research around the world, and research on the undergraduate and graduate level is prevalent throughout all disciplines.