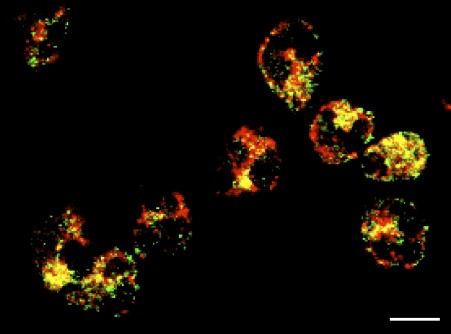 Newswise — Researchers at the Baylor Institute for Immunology Research have discovered that the neutrophils of systemic lupus erythematosus (SLE) patients release oxidized DNA from their mitochondria that can stimulate an unwanted immune response. The study “Oxidized mitochondrial nucleoids released by neutrophils drive type I interferon production in human lupus,” which will be published online April 18 in The Journal of Experimental Medicine, suggests that targeting the pathways that lead to the accumulation of this DNA and/or facilitate its removal could be new ways to treat this chronic autoimmune disease.

SLE is a common autoimmune disorder in which the body’s immune system mistakenly attacks healthy tissues. Though the initial trigger for the disease remains unknown, it is characterized by the generation of autoantibodies that recognize the patient’s own DNA or RNA–protein complexes and the excessive production of type I interferons, signaling proteins that activate the body’s immune response. Virginia Pascual and colleagues at the Baylor Institute for Immunology Research in Dallas, Texas, previously discovered that SLE patient neutrophils—a type of immune cell—respond to certain autoantibodies by extruding some of their DNA, which subsequently stimulates another type of immune cell, called plasmacytoid dendritic cells, to produce type I interferons.

The paper by Simone Caielli and colleagues now reveals that SLE neutrophils accumulate oxidized DNA within their mitochondria and eventually extrude it from the cell to potently stimulate the production of interferons by plasmacytoid dendritic cells. Mitochondria are the cell’s energy-generating organelles, and they contain their own DNA packaged up into structures called nucleoids. The researchers discovered that, to safely rid themselves of oxidized mitochondrial DNA, neutrophils usually disassemble their nucleoids and transfer the oxidized DNA to the cell’s lysosomes for degradation. However, when SLE neutrophils are exposed to certain autoantibodies, nucleoid disassembly is impaired, and the oxidized DNA is retained inside mitochondria before eventually being extruded from the cell to stimulate interferon production. SLE patients also generated antibodies against the extruded, oxidized mitochondrial DNA, Caielli et al. found.

About The Journal of Experimental MedicineThe Journal of Experimental Medicine (JEM)) is published by The Rockefeller University Press. All editorial decisions on submitted manuscripts are made by research-active scientists in conjunction with our in-house scientific editors. JEM provides free online access to many article types immediately, with complete archival content freely available online since the journal's inception. Authors retain copyright of their published works, and third parties may reuse the content for non-commercial purposes under a Creative Commons license. For more information, please visit jem.org. Follow us on Twitter at @JExpMed and @RockUPress.