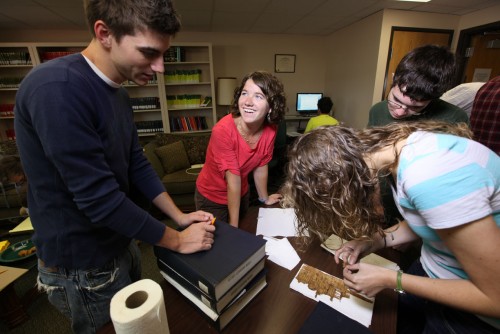 Scholar Dr. Scott Carroll of Baylor University dissolves a mummy mask to retrieve ancient manuscripts encased inside. In the other image, a student pieces together fragments of an ancient text unearthed from the mask. The work at Baylor is part of an international project that gives undergraduate students a rare opportunity to conduct hands-on research of Greek poetry and texts dealing with the Judeo-Christian story. 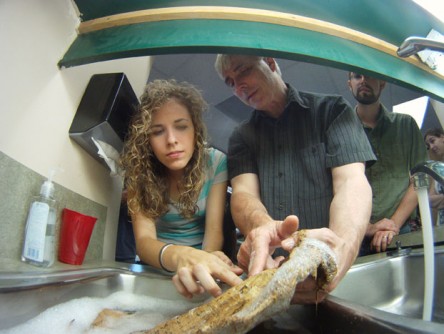 Newswise — Fragments of ancient, rare manuscripts of Greek classical poetry, Greek philosophy and Judeo-Christian Scriptures are being retrieved from papier-mâché-like mummy wrappings on loan to Baylor University — all part of an international project that will give undergraduate humanities students rare hands-on research.

The project, called the Green Scholars Initiative, eventually will include more than 100 universities, with Baylor University as the primary academic research partner. Professor-mentors will guide students through research and publication of articles about rare and unpublished documents, among them an ancient Egyptian dowry contract on loan to Kent State University and an ancient papyrus of Greek statesman Demosthenes’ famed “On the Crown” Speech, said Dr. Jerry Pattengale, initiative director and a Distinguished Senior Fellow with Baylor’s Institute for Studies of Religion.

Research materials are provided from the massive Green Collection, one of the world’s newest and largest collections of items such as Dead Sea Scrolls, a letter by Martin Luther and a fourth-century Alexandrian casket cover. The collection is named for the Green family, which owns the arts and crafts retailer Hobby Lobby.

“A lot of universities are able to study ancient texts by digital access, but to have actual access to the original manuscript is unusual and quite lucky,” said Dr. Nancy Hensel, executive officer of the Washington, D.C.-based Council on Undergraduate Research. “It’s a really wonderful opportunity to learn research skills through original and primary materials and also to learn how to preserve and handle them.”

The first step in the research adventure was taken in April by Dr. Scott Carroll, director and principal investigator of the Green Collection research projects and a research professor of manuscript studies/biblical tradition in Baylor’s ISR.

Carroll — surrounded by hushed students and other professors — dissolved ancient Egyptian mummy coverings in a gentle dissolving bath. Discarded texts made of papyrus plants were recycled for coffins and death masks by moistening them, covering an embalmed body, then plastering, drying and painting the material.

What emerged were more than 150 fragments of ancient papyri texts — treasures including funerary texts, letters in Greek and in Coptic, a fourth-century A.D. (C.E.) Coptic Gospel text and fragments of classical writings by Greek authors.

“As discoveries go, it won’t get much more dramatic than this,” Carroll said. He also unearthed new texts from a dissolved mummy mask on Sept. 8, which have yet to be studied.

Professors from Baylor’s religion and classics departments and Honors College will work with students on a manuscript commentary on the Gospel of Matthew that dates to somewhere between the 9th and 11th century A.D. (C.E.) and an illuminated 14th-century manuscript of a bestselling anonymous illustrated work of popular theology, said Dr. David Lyle Jeffrey, Distinguished Professor of Literature and the Humanities in Baylor’s Honors College and Distinguished Senior Fellow and Director of Manuscript Research in Scripture and Tradition at Baylor’s IRS.

Lending such materials for undergraduate research is “the opposite of an ivory-tower philosophy that would reserve them only for a few professors,” enthused Dr. Jeff Fish, an associate professor of classics at Baylor. “I’ve spend summers traveling to the National Library of Naples and to Oxford University, but this brings the world of research and the world of teaching together in a way I never thought possible. This is something that just doesn’t happen.”

He is mentoring student sleuth Stephen Margheim, a Baylor senior University Scholars major with a focus in classics, as Margheim painstakingly pieces together and studies fragments of a 1,600-year-old Iliad transcription by an unknown scribe.

Margheim, who has studied Greek, was stunned when he spotted the Greek words for “glory arose” amid the writings. He recognizing it as a theme of the fifth book of the Iliad, an epic poem about the Trojan War from about the eighth century B.C.E.

“Stephen had a concurrent class about Homer and was carrying that phrase around in his head,” Fish said. “When he saw it, he was on the scent. I’d get these e-mails from him at 4 a.m., saying, ‘I discovered . . . ”’

The scraps range in size from a flattened softball to a sesame seed. Margheim huddles for hours at a table, using tweezers to arrange and re-arrange pieces of the puzzle until they fit, then transcribes the words. The text eventually will be compared with other early transcriptions of the Iliad, which tells of the war between the Greeks and Trojans but focuses upon a power struggle between two Greek warriors, Achilles and Agamemnon.

Some of the fragments Fish and Margheim are examining are from one of the Iliad’s most touching passages, Fish said. In it, the warrior Hector has returned to Troy. He sees his wife, who begs him to stay behind and defend Troy from the walls and not leave her a widow. He picks up his baby boy, who is frightened by Hector’s helmet.

“The research is both very taxing and very rewarding,” Margheim said. “There’s something very different about reading Greek when it’s real handwriting, when you think that someone wrote that long ago. It’s a glimpse behind the veil of what professional classicists do. It’s my goal to become one, and this is just kind of a miracle.”

ABOUT BAYLORBaylor University is a private Christian university and ranked nationally as a research institution by the Carnegie Foundation for the Advancement of Teaching. Baylor provides a vibrant campus community for approximately 15,000 students. It blends interdisciplinary research with a faculty commitment to teaching and scholarship. Chartered in 1845 by the Republic of Texas through the efforts of Baptist pioneers, Baylor is the oldest continually operating university in Texas. Located in Waco, Baylor welcomes students from all 50 states and more than 80 countries to study a broad range of degrees among its 11 nationally recognized academic divisions. 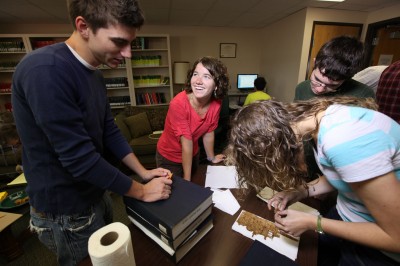 Caption: Scholar Dr. Scott Carroll of Baylor University dissolves a mummy mask to retrieve ancient manuscripts encased inside. In the other image, a student pieces together fragments of an ancient text unearthed from the mask. The work at Baylor is part of an international project that gives undergraduate students a rare opportunity to conduct hands-on research of Greek poetry and texts dealing with the Judeo-Christian story. 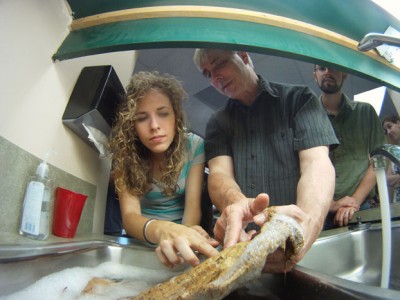