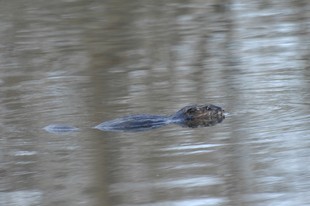 "José" the beaver in his newly adopted home in the Bronx River, where it runs through the grounds of the Bronx Zoo.

Newswise — The beaver, the state mammal of New York, and whose image adorns the official seal of New York City, has returned to the Big Apple after an absence that dates to colonial times, when the animal was hunted to local extinction. The evidence can be found on the Bronx River, where employees from the Bronx Zoo-based Wildlife Conservation Society have discovered a beaver, and its lodge along with numerous gnawed tree stumps, proving that a New York City original has come home. The beaver has been photographed and filmed.

The beaver " nicknamed "JosÃ©" after Congressman JosÃ© E. Serrano, a tireless advocate for the Bronx River " probably swam downstream from Westchester County, where these emblematic animals are still sometimes spotted.

"This is a symbolic moment for our great city," said Dr. Steven Sanderson, president and CEO of the Bronx Zoo-based Wildlife Conservation Society. "New York City is the epitome of an urban environment. The fact that an animal which represents the wild frontier of North America can live and thrive in a river that runs through the Bronx Zoo is proof that we can coexist with nature anywhere on the planet. Anything is possible."

The beaver is North America's largest rodent, with a combined head and body length between two and three feet, and weighing between 25 and 55 pounds, with a few specimens weighing up to 90 pounds. The distinctively flat tail is between 9 inches and 1-and-a-half feet in length, and is used for steering the animal while swimming, fat storage during winter, and creating a loud slapping sound on the surface of the water for either scaring off intruders or warning other beavers of potential danger.

Aside from its size, the beaver is better known as one of nature's great engineers, able to alter its environment by felling large trees with its powerful gnawing teeth and through the construction of dams and lodges. Although sometimes problematic in terms of flooding and property damage, dams also create additional habitat for other species in the form of ponds, which serve to purify running water through the removal of silt.

"The return of the beaver to the Bronx River is not only an enormous success in our ongoing environmental restoration project, it's also a great victory for our community," said Congressman JosÃ© E. Serrano (D-Bronx), who has helped secure $14.5 million in federal grants for the Bronx River's restoration over the past five years. "I've always felt that what's good for the environment is also good for the Bronx and its citizens."

Historically, the beaver was central to the founding of New Amsterdam, with beaver skins being the colony's chief commodity and export. During 1626, when the Dutch purchased the island of Manhattan from Native Americans, traders shipped 7,246 beaver pelts back to the Netherlands. By 1671 (with the city renamed New York by the English), the trade in beaver skins climbed to 80,000 skins annually. Beaver pelts were even used as currency, with a single skin representing about 16 guilders. The central role of the beaver in New York City's history is featured on the city's official seal. Just one block south of the New York Stock Exchange in Manhattan is Beaver Street, another vestige of the rodent's impact on the city's founders.

It was the beaver's luxurious pelt that almost proved its undoing. In pre-colonial America, beavers in North America were thought to number more than 60 million. By 1800, they had completely vanished in the United States east of the Mississippi; by 1930, the beaver was near extinction and in need of protection. Today, the beaver has rebounded in much of its traditional range.

"Having beavers back in the Bronx River is certainly one of our proudest achievements," said Linda Cox, Bronx River Administrator for the New York City Parks Department and executive director of the Bronx River Alliance, which was created in 2001 to help restore and protect the Bronx River corridor and greenway. "It's proof positive that our efforts to bring the river back to ecological health have been successful. We look forward to beaver watching in the spring!"