UW-Milwaukee Professor of Anthropology Bettina Arnold combines excavating and CT scanning to bring the past back to life. Here she introduces us to the "Harley biker chicks" who lived in Germany 2,600 years ago. 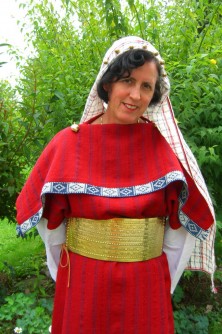 If wealth had a color for the ancient Celts it was red. Dye for this hue could only be made from dried bodies of kermes, a Mediterranean insect. 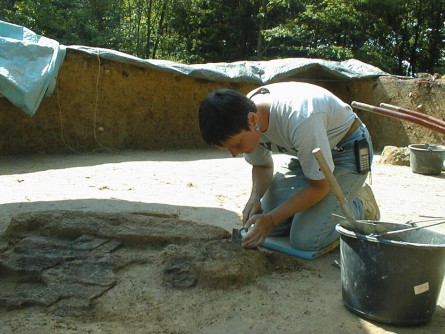 Newswise — If you wanted to get ahead in Iron-Age Central Europe you would use a strategy that still works today – dress to impress and throw parties with free alcohol. Pre-Roman Celtic people practiced what archaeologist Bettina Arnold calls “competitive feasting,” in which people vying for social and political status tried to outdo one another through power partying.

Artifacts recovered from two 2,600-year-old Celtic burial mounds in southwest Germany, including items for personal adornment and vessels for alcohol, offer a glimpse of how these people lived in a time before written records were kept.

That was the aim of the more than 10-year research project, says Arnold, anthropology professor at the University of Wisconsin-Milwaukee and co-director of a field excavation at the Heuneburg hillfort in German state of Baden-Wurttemberg. The work was partially funded by the National Geographic Society and Arnold collaborated with the State Monuments Office in Tübingen, Germany.

In fact, based on the drinking vessels found in graves near the hillfort settlement and other imported objects, archaeologists have concluded the central European Celts were trading with people from around the Mediterranean.

Braü or mead?“Beer was the barbarian’s beverage, while wine was more for the elite, especially if you lived near a trade route,” says Kevin Cullen, an archaeology project associate at Discovery World in Milwaukee and a former graduate student of Arnold’s.

Since grapes had not yet been introduced to central Europe, imported grape wine would indicated the most social status. The Celts also made their own honey-based wine, or mead, flavored with herbs and flowers, that would have been more expensive than beer, but less so than grape wine.

They also made a wheat or barley ale without hops that could be mixed with mead or consumed on its own, but that had to be consumed very soon after being made. “Keltenbräu,” is an example of such an ale. It would have been a dark, roasted ale with a smoky flavor. To the upper-class, the quantity of alcohol consumed was as important as the quality. Arnold excavated at least one fully intact cauldron used for serving alcoholic beverages in one of the graves at Heuneburg. But it’s hard to top the recovery of nine drinking horns – including one that held 10 pints – at a single chieftain’s grave in nearby Hochdorf in the 1970s.

Dapper dudes and biker chicksIn addition to their fondness for alcohol, Celtic populations from this period were said by the Greeks and Romans to favor flashy ornament and brightly striped and checked fabrics, says Arnold. The claim has always been difficult to confirm, however, since cloth and leather are perishable. The Heuneburg mounds yielded evidence of both, even though no bones remain due to acidic soil. But the team of archaeologists were able to reconstruct elements of dress and ornamentation using new technology.

Rather than attempt to excavate fragile metal remains, such as hairpins, jewelry, weapons and clothing fasteners, Arnold and her colleagues encased blocks of earth containing the objects in plaster, then put the sealed bundles through a computerized tomography, or CT, scanner.

“We found fabulous leather belts in some of the high-status women’s graves, with thousands of tiny bronze staples attached to the leather that would have taken hours to make,” she says. “I call them the Iron-Age Harley-Davidson biker chicks.”Images show such fine detail, the archaeologists theorize that some of the items were not just for fashion. “You could tell whether someone was male, female, a child, married, occupied a certain role in society and much more from what they were wearing.”

The pins that secured a veil to a woman’s head, for example, also appear to symbolize marital status and perhaps motherhood. Other adornment was gender-specific – bracelets worn on the left arm were found in men’s graves, but bracelets worn on both arms and neck rings were found only in graves of women.

Surprisingly, it was the metal implements in close contact with linen and wool textiles in the graves that provided a chance for their preservation. Bits of fabric clinging to metal allowed the archaeologists to use microscopic inspection to recreate the colors and patterns used.

“When you can actually reconstruct the costume,” says Arnold, “all of a sudden these people are ‘there’ – in three dimensions. They have faces. They can almost be said to have personalities at that point.”

Many of the items from the project will be displayed at the exhibit, “The World of the Celts,” Sept. 15, 2012-Feb. 17, 2013 at the Landesmuseum in Stuttgart, the capitol of the German state of Baden-Wurttemberg. http://www.landesmuseum-stuttgart.de/en/exhibitions/future.php 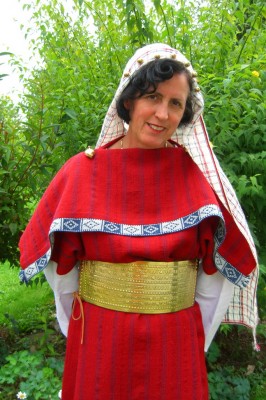 Caption: If wealth had a color for the ancient Celts it was red. Dye for this hue could only be made from dried bodies of kermes, a Mediterranean insect. 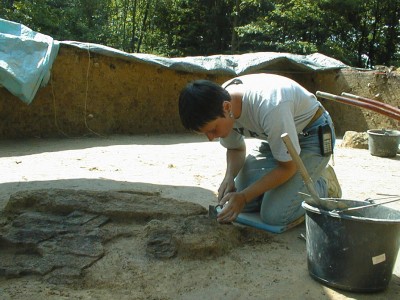