Bees ‘Self-Medicate’ When Infected with Some Pathogens 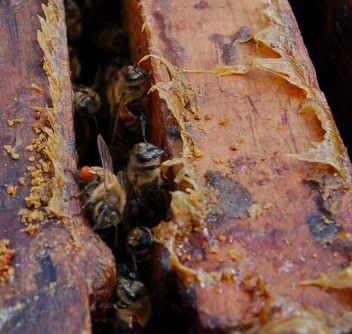 Newswise — Research from North Carolina State University shows that honey bees “self-medicate” when their colony is infected with a harmful fungus, bringing in increased amounts of antifungal plant resins to ward off the pathogen.

“The colony is willing to expend the energy and effort of its worker bees to collect these resins,” says Dr. Michael Simone-Finstrom, a postdoctoral research scholar in NC State’s Department of Entomology and lead author of a paper describing the research. “So, clearly this behavior has evolved because the benefit to the colony exceeds the cost.”

Wild honey bees normally line their hives with propolis, a mixture of plant resins and wax that has antifungal and antibacterial properties. Domesticated honey bees also use propolis, to fill in cracks in their hives. However, researchers found that, when faced with a fungal threat, bees bring in significantly more propolis – 45 percent more, on average. The bees also physically removed infected larvae that had been parasitized by the fungus and were being used to create fungal spores.

Researchers know propolis is an effective antifungal agent because they lined some hives with a propolis extract and found that the extract significantly reduced the rate of infection.

And apparently bees can sometimes distinguish harmful fungi from harmless ones, since colonies did not bring in increased amounts of propolis when infected with harmless fungal species. Instead, the colonies relied on physically removing the spores.

However, the self-medicating behavior does have limits. Honey bee colonies infected with pathogenic bacteria did not bring in significantly more propolis – despite the fact that the propolis also has antibacterial properties. “There was a slight increase, but it was not statistically significant,” Simone-Finstrom says. “That is something we plan to follow up on.”

There may be a lesson here for domestic beekeepers. “Historically, U.S. beekeepers preferred colonies that used less of this resin, because it is sticky and can be difficult to work with,” Simone-Finstrom says. “Now we know that this is a characteristic worth promoting, because it seems to offer the bees some natural defense.”

The paper, “Increased resin collection after parasite challenge: a case of self-medication in honey bees?,” was co-authored by Dr. Marla Spivak of the University of Minnesota and is available online from PLoS ONE. The research was funded by the National Science Foundation.