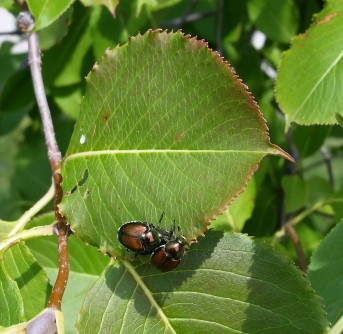 A pair of Japanese beetles on a tree leaf on the Creighton University campus. 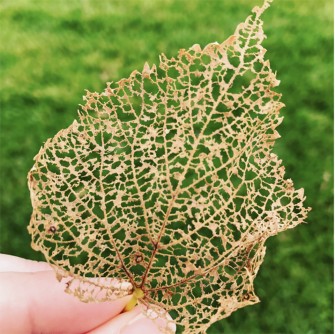 The aftermath of a Japanese beetle's feeding on a linden tree leaf.

Newswise — The Japanese beetle is a scintillating green with coppery accents and tiny, white wisps of hair here and there.

It lumbers about on wings far too small for its heavy body and it can carve a plant leaf with some of the finest tracery found in nature.

“It’s kind of a cute little bug,” said Creighton University professor of biology Ted Burk, DPhil. “With that iridescent green and the little white tufts, you might say they have some beauty, in their own way. Except for the horrendous damage they do.”

And in the summer of 2017, the Japanese beetle around Omaha is having a heyday. Swarms of the insect have descended broadly across the region and that delicate leaf-cutting they practice is making some trees and other plants in the area look as if it’s November rather than mid-July.

The beetles, often in clumps of a half dozen or more, eat leaves in a process called skeletonization, consuming all parts of the leaf except for the veins and stems. The result is a hollowed, dead, brown skeleton of a leaf. The beetles are also known to feed on fruits and flowers, including grapes, pears, peaches, apples, tomatoes and roses.

They also seem to copulate at will, oftentimes while eating.

“It’s not an elaborate courtship, by any means,” Burk said. “The females send out a sex pheromone and it gets the males’ attention and there doesn’t seem to be any problems with mating and feeding simultaneously.”

And while they appear to be everywhere and eating everything, Burk said the Japanese beetle is relatively modest in its reproduction — each female laying around 60 eggs, compared to some insects that lay eggs in the hundreds.

“They’re survivors,” Burk said. “They burrow down into the soil and they’ll lay eggs that turn into grubs that live there for 10 months. Then they pop out and feed and fly around for about six weeks and then they’ll repeat the cycle, digging back into turf grass, laying eggs.”

Japanese beetle grubs — classed with a group of beetles comprising the white grubs that are the bane of lawn owners and golf course managers — will also do damage, feeding on turf roots.

An invasive species Japanese beetles are new to Nebraska — first reported in large numbers in the state in 2011 — but they’ve been established in the eastern U.S. since 1916. They’ve done a fair amount of damage to plants and trees over the past seven summers, but Burk said this year’s generation appears to be cutting a wider swath.

Normally, Burk said, an invasive species enjoys a brief blossoming without any natural parasites or predators threatening. So far, however, the Japanese beetle has enjoyed a relatively longer respite in Nebraska, strange considering it took nearly a century for the bugs to migrate west.

“One of the mysterious things about them is how they did establish themselves so well on the East Coast and then it took them almost a hundred years to move west,” he said. “They do seem especially bad this year and this may be a new normal as far as numbers in a big year. But there will still be boom years and bust years.”

While the feeding habits of the Japanese beetle can be catastrophically damaging to annual plants and crops, established flora like the linden and maple trees around Creighton’s campus that have borne the brunt of the insects’ voracity should recover, provided the area doesn’t experience prolonged drought and that there’s not a similar resurgence of the beetles next year.

As for ridding the garden of the beetles — outside of chemicals that can also have detrimental effects on plants and helpful insects — Burk suggests simply knocking the beetles off their perches and into a bucket of soapy water or spraying them off with a garden hose. To ward off future infestations, milky spore, a disease to which Japanese beetles are susceptible, can be purchased in powder form and used to treat lawns and other grassy areas before larvae become adults. Some parasite wasps have also been introduced to keep the population down.

Traps have been designed for the insects using the female sex pheromone to capture males and the scents of various flowering plants to attract females. But, Burk said, sometimes the bait will simply attract beetles to the area and not always lure them inside the trap.

“Meaning that you’ve now got a bigger population you’ve brought to your backyard and a ready food supply,” he said.

Burk said he wasn’t sure if birds are finding the beetles appetizing, given that there remain a preponderance of the creatures buzzing about. It may also be that there are so many that predators are having a hard time keeping up with the supply.

The good news is that the Japanese beetles should be on their way out in the next few weeks — at least the mature, flying ones.

“Early July to mid-August is about the extent of their time above ground,” Burk said. “There’s always a tendency with bugs to forget how bad they were a year ago when you get a good population of them. Even so, I’d say we’ve had more this year and they are doing some pretty horrendous damage.”