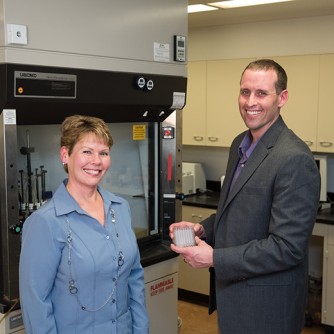 Linda Yarrow, instructor, and Brian Lindshield, associate professor, both in the food, nutrition, dietetics and health department at Kansas State University, explain the causes, symptoms and most at-risk populations for common mineral deficiencies.

Newswise — MANHATTAN, Kan. — Iron and zinc are critical minerals, but many people are deficient in them. The good news, according to nutritionists at Kansas State University, is that these deficiencies can be diagnosed through a simple blood test and are easily treatable.

Women need more iron because they lose more iron, says Linda Yarrow, instructor of food, nutrition, dietetics and health. An iron deficiency may be an extra concern for pregnant women who face hemodilution, in which increased body fluids dilute hemoglobin levels while increased mineral levels are needed for fetal growth.

"Given that an ounce of beef provides 1 milligram of iron, it can be a challenge for women of childbearing age to meet their iron needs through diet alone," Lindshield said.

While iron deficiency is somewhat common, Yarrow says it is rare for the deficiency to be found alone.

Zinc deficiency is most likely in older adults, children living in food-insecure households, persons with alcoholism, and those with vegan diets, especially in developing countries. Lindshield says veganism can contribute to zinc deficiency because zinc is not absorbed as well from plant foods as from animal-based foods.

Yarrow advises anyone who suspects they may have deficiencies in iron, zinc or any other minerals to consult their physician rather than attempting to self-diagnose or self-treat. A physician will ask questions about dietary intake and symptoms and possibly order laboratory work to determine if any deficiencies are present, Yarrow says.

If deficiencies are confirmed, the client will receive education about increasing intake of foods that contain the deficient nutrient. The client also may receive recommendations on supplements to take to achieve desired nutrient levels. Yarrow says this process is crucial because there is plenty of misinformation on the internet and because if a supplement is needed, self-determining which supplement to take and how much can be harmful. For example, overly high levels of Vitamin D have been linked to health problems, Yarrow says.

"Nutrient deficiencies can be damaging, but excesses of many nutrients can be just as detrimental," Yarrow said. "Excessive intake of any nutrient has potential harmful effects, so please visit your physician for deficiency diagnosis and treatment."