Beneath the Surface: What Zebrafish Can Tell Us About Anxiety 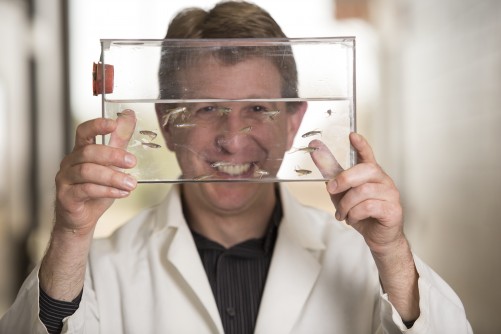 Ian Woods, assistant professor of biochemistry at Ithaca College, uses zebrafish to research how genetics influence responses to stimuli that can trigger anxiety.

Newswise — ITHACA, NY — The right tool for the job is important. A surgeon wouldn’t use a chainsaw when a scalpel offers more control. But sometimes the best treatments available aren’t precise. For example, anxiety medications available today are too blunt in how they target the brain, according to Ian Woods, assistant professor of biochemistry at Ithaca College.

“If you look at current treatments for anxiety disorders, the approach is a bit like taking a sledgehammer to a mosquito,” he said. “The treatments may work for anxiety, but they can have a lot of side effects.”

Woods researches how genetics influence responses to stimuli that can trigger anxiety, and he’s using zebrafish — a tropical member of the minnow family named for the black stripes on their bodies — to do so. He and his team of student researchers examine how fish with tweaked genes respond to different triggers compared to unmodified fish. The work could someday lead to better, more nuanced medications for anxiety disorders.

Zebrafish make ideal test subjects for several reasons. The embryos are transparent and develop outside the mother’s body, making it easy for Woods and his team to observe their growth under a microscope. They develop rapidly, are easy to care for and easy to breed in large quantities.

Specifically, Woods is looking at neuropeptides, which are the chemical messengers between brain cells. Different neuropeptides deliver different messages, which in turn produce different behaviors. “Fish have the same neuropeptides as humans, and they mostly do the same things in the brain,” Woods said. “We can never faithfully model a complex human behavior like anxiety, but when we’re trying to figure out how the brain works, it’s useful to see inside a fish.”

Woods and his team isolate specific genes to disrupt, amplify, alter or replace, then analyze the movements of the modified fish with the aid of a computerized camera system. They examine responses to stimuli such as slight changes in water temperature, decreases in light intensity, or mild chemical irritants such as mustard oil.

“By observing the ensuing behavioral changes in the fish, we know how that replaced gene changed the message in the brain,” Woods explained. For example, fish exhibiting anxiety-like behaviors might hug the walls of the tank, while the rest will swim toward the middle. It’s not unlike social experiments in which the room temperature is raised gradually to see how human occupants will react.

“Genes typically don’t cause the anxiety,” Woods said. “But they can make organisms more susceptible to environmental triggers that might elicit what we’d call an anxious behavior.”

Anxiety disorders are the most common mental illness in the United States; over 40 million Americans suffer from some type in their lifetimes. But medications can be overprescribed and abused. For example, emergency room visits related to the use of Xanax and related drugs doubled from 2005 to 2011, according to the U.S. Substance Abuse and Mental Health Services Administration.