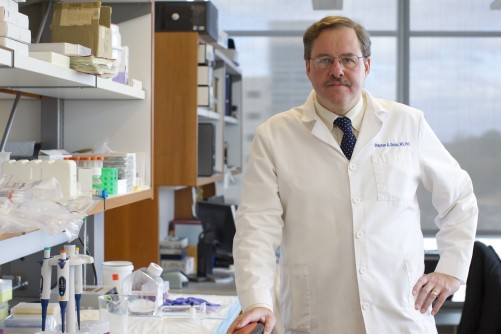 Dr. Stephan A. Grupp is a pediatric oncologist at The Children's Hospital of Philadelphia.

Newswise — Philadelphia, Dec. 6, 2014 –An innovative cell therapy against a highly aggressive form of acute lymphoblastic leukemia (ALL) continues to show highly promising results in children treated in a pilot study. Ninety-two percent of the 39 children receiving bioengineered T cells had no evidence of cancer at one month after treatment, with this complete response persisting in some cases for more than two years. The personalized cell therapy reprograms a patient’s immune system and offers the potential of long-term success.

“As we continue to follow children in this study, we see exciting results for patients who have exhausted their other treatment options,” said study leader Stephan A. Grupp, M.D., Ph.D., a pediatric oncologist at The Children’s Hospital of Philadelphia and a Professor of Pediatrics at the Perelman School of Medicine of the University of Pennsylvania. Grupp described outcomes and follow-up results of this pilot clinical trial for pediatric patients with ALL in a press program today at the annual meeting of the American Society of Hematology (ASH) in San Francisco.

Grupp, first author Shannon Maude, M.D., Ph.D., a pediatric oncologist at CHOP and Assistant Professor of Pediatrics at the Perelman School of Medicine of the University of Pennsylvania, and colleagues reported today that of the 39 children treated, 36 (92%) had complete responses one month after treatment. Of those 36 patients, 25 (69%) remained in remission at a median follow-up of 6 months after treatment. There were 10 relapses among the 36 patients with complete responses; 5 of the relapsed patients died.

Grupp is an ongoing collaborator with colleagues at Penn Medicine, led by Carl H. June, M.D., who offer this personalized cell therapy as a treatment for adult patients with other types of cancer.

The first child to undergo this therapy, 9-year-old Emily Whitehead, remains cancer-free since her T cell treatment in April 2012, and continues to enjoy normal childhood activities like going to school and playing with her dog, Lucy. Emily has appeared prominently in news stories since her doctors announced dramatic findings during the December 2012 ASH meeting.

A relatively new approach in cancer treatment, this type of immunotherapy modifies T cells, the workhorses of the body’s immune system, to attack B cells, other immune cells that become cancerous in specific leukemias such as ALL. Bioengineered T cells, called CTL019 cells, function as cancer hunters, killing the leukemia cells that normally evade regular T cell surveillance. Researchers first extract a patient’s own T cells. They then use bioengineering techniques to reprogram each patient’s T cells into chimeric antigen receptor cells—the CTL019 cells—custom-designed to bind to a protein called CD19 that exists only on the surface of B cells. After being returned to the patient’s body, the CTL019 cells proliferate and then eliminate B cells. Moreover, they persist in the circulation, helping to guard against the cancer’s recurrence.

As the CTL019 cells potently attack leukemia cells, they also stimulate an unwanted, toxic immune response called cytokine release syndrome in patients. The care team successfully counteracted these side effects with an immunomodulating drug that had never been used for that purpose before, an approach which now has been adopted widely by cell therapy groups. In addition, because the CTL019 therapy eliminates healthy B cells along with cancerous B cells, patients must receive infusions of immunoglobin to perform the immune function provided by normal B cells.

“Our results show that these engineered “hunter” cells greatly expand in patients, producing very high complete response rates that then persist in patients, potentially allowing for long-term disease control,” said Grupp. “Our next step is to conduct a Phase II, multi-site trial to assess safety and efficacy in multiple centers, which is now underway.”

This past July, the U.S. Food and Drug Administration designated the CTL019 approach as a Breakthrough Therapy, helping to expedite its progress into broader clinical trials.

In August 2012, Novartis acquired exclusive rights from Penn to CTL019. Several authors from Novartis are co-authors of the abstracts presented by Grupp and others at the ASH meeting.