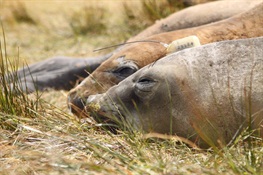 Newswise — Each year, WCS scientists author or co-author nearly 300 peer-reviewed studies and papers. “WCS 3 Sentence Science” is a regular tip-sheet – in bite sized helpings – of some of this published work.

1. The use of satellite telemetry in conservation is entering a “golden age,” and is now being used to track the movements of individual animals at unprecedented scales.

2. To determine the success or failure of satellite tracking devices across species and habitats, authors analyzed data from over 3,000 devices deployed on 62 terrestrial species in 167 projects worldwide

3. While the analysis showed that 48 percent of the unit deployments ended prematurely – half of them due to technical failure – the study showed that the performance of satellite telemetry applications has shown improvements over time, and based on the findings, recommendations are provided for both users and manufacturers.

PLOS ONE: “Right on track? Performance of satellite telemetry in terrestrial wildlife research”