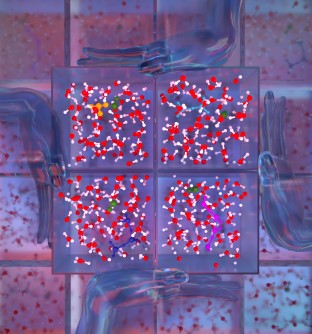 Water under extreme pressure and temperatures displays odd properties, which were modeled by University of Chicago scientists.

Deep inside the Earth exist pockets of water, but the liquid there isn’t like the water on the surface.

When exposed to unimaginably high temperatures and pressures, water exhibits all sorts of weird phases and properties, from remaining a liquid at temperatures 10 times higher than the boiling point to existing as a liquid and a solid at the same time.

This strange world is still not fully understood, but a team of University of Chicago scientists ran quantum simulations to develop a new model of the behavior of water at extremely high temperatures and pressures. The computational measurements, published June 18 in the Proceedings of the National Academy of Sciences, should help scientists understand water’s role in the makeup of the mantle and potentially in other planets.

“Subtle physics at the molecular level can impact properties of matter deep inside planets,” said Viktor Rozsa, a UChicago graduate student and first author on the paper. “How water reacts and transports charge on a molecular scale affects our understanding of phenomena ranging from the movement of magma, water and other fluids to the magnetic field of the entire planet.”

Under the conditions considered in the study—more than 40 times hotter than our everyday conditions and 100,000 times greater than atmospheric pressure—water is regularly ripping apart and re-forming its own chemical bonds. The result is that it can interact very differently with other minerals than it does on the surface of the earth.

Scientists have been trying to pin down exactly how these atoms interact for decades: It’s extremely difficult to test experimentally, as water can react with the instrument itself. “It’s surprising how little we know about water below the crust,” said lead author Giulia Galli, the Liew Family Professor of Molecular Engineering and professor of chemistry at UChicago and a senior scientist at Argonne National Laboratory.

But water in these conditions exists throughout the mantle—it’s possible there may be more water distributed inside the Earth than there is in the oceans—and scientists would like to know exactly how it behaves in order to understand its role in the Earth and how it moves through the mantle.

Galli’s group built a model by performing quantum mechanical simulations of a small set of water molecules at extremely high pressures and temperatures—in the range of what you need to synthesize a diamond.

Their model, built with the aid of simulations performed at the Research Computing Center at UChicago, provides an explanation for some of water’s more mysterious properties at such pressures, such as the connection between bizarrely high conductivity and how its molecules disassociate and re-associate.

It also predicts and analyzes a controversial set of measurements called the vibrational spectroscopic signatures of water, or fingerprints of molecular movement that lay out how molecules are interacting and moving.

In addition to furthering understanding of our own planet, Galli said, “the ability to do the kind of simulations performed in our paper could have important consequences on modeling exoplanets.” Many scientists, including those at UChicago, are narrowing the conditions for distant planets that might have the conditions to create life, and much of this search revolves around water.

Galli is a member of the research team in the Institute for Molecular Engineering’s water theme, led by James Skinner, the Crown Family Professor of Molecular Engineering. The team seeks to understand the physical, chemical and biological manifestations of water, and to develop applications from innovative purification filters, to new materials for desalination and lithium ion harvesting, to new catalysts for water chemistry and disinfection.

While water is everywhere and intensively important to us, Galli said, it is notoriously difficult to simulate and study: “This is one step in the long journey to understanding.”

Other authors on the study were UChicago postdoctoral researcher Federico Giberti and Ding Pan, a former postdoctoral associate and now a professor at the Hong Kong University of Science and Technology.