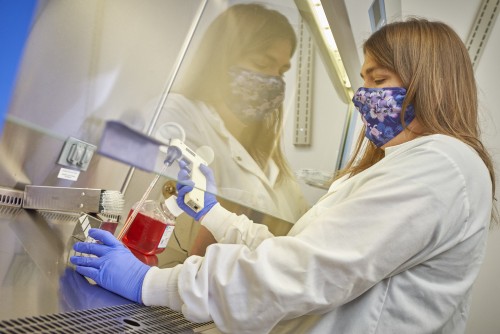 Newswise — Summer is here, and that means more time soaking up the sun for many of us.

But sun rays contain ultraviolet (UV) light that damages DNA, the part of cells where genetic information is stored. An hour of unprotected exposure to the sun can cause up to 200,000 “lesions,” or areas of damage, in a single cell.

During replication, a cell copies its entire genome so that when it splits in two, each of the daughter cells contains all of the genetic information. Sometimes human DNA is damaged by naturally occurring processes or environmental factors such as sunlight. Fortunately, cells have repair pathways to fix  damage so faulty DNA is not passed on to the daughter cells. When those mechanisms fail, mutations, which are permanent changes to the gene, occur. Usually several mutations are needed before a cell becomes cancer.

Through a four-year, $792,000 research scholar grant from the American Cancer Society (ACS), Clemson assistant professor of genetics and biochemistry Jennifer Mason is studying the role of FBH1, a DNA repair protein, in response to replication damage. FBH1 mutations have been identified in skin cancer.

“The DNA repair pathways work really well, but if you’re constantly exposing your skin to sunlight, the chances of a mistake being made go up. You’re increasing the chances of a cell surviving with mutations when it shouldn’t, and cancer is a disease of mutations,” said Mason. She will work to discover how FBH1 protects against cancer formation.

Skin cancer is the most common type of cancer, with more than 5 million cases diagnosed each year in the United States — more than all other cancers combined. And skin cancer rates have been on the rise over the past few decades.

Melanoma is the most serious type of skin cancer. According to ACS, about 99,780 new cases of invasive and 97,920 cases of in situ melanoma will be diagnosed this year. About 7,650 people will die of melanoma in 2022. The organization says exposure to ultraviolet radiation from the sun or indoor tanning devices causes over 90 percent of all skin cancer.

When a cell has a lot of damage, it eventually must decide whether it can repair that damage. When the answer is no, it undergoes apoptosis, a process in which the cell kills itself. FBH1 plays a role in initiating that process.

If there’s a loss of FBH1 and the cells damaged by UV light don’t die, cells can accumulate mutations and potentially predispose that person to melanoma.

Mason’s research is not to figure out why FBH1 is missing in some cells. Instead, her research is trying to understand what happens in a cell once FBH1 is lost.

“We’re trying to understand how cells becomes genomically unstable and why, and what aspect of that function is important for preventing melanoma,” she said.

One of the grant’s goals is to test potential strategies for killing cells lacking FBH1.

“This work will increase our knowledge about how cells protect DNA integrity during replication and has the potential to identify novel chemotherapeutic strategies for tumors lacking FBH1,” she said.