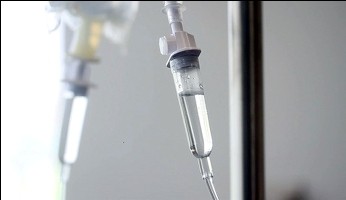 Bevacizumab delivered via I.V. drip to a vein with chemotherapy treatment

Newswise — Patients with advanced, recurrent, or persistent cervical cancer that was not curable with standard treatment who received the drug bevacizumab (Avastin) lived 3.7 months longer than patients who did not receive the drug, according to an interim analysis of a large, randomized clinical trial.

The clinical trial, known as GOG240, was sponsored by the National Cancer Institute (NCI), part of the National Institutes of Health, and conducted by a network of researchers led by the Gynecological Oncology Group (GOG). Genentech, Inc., South San Francisco, Calif., the drug manufacturer, provided support for the trial under the Cooperative Research and Development Agreement (CRADA) with NCI for the clinical development of bevacizumab.

The data safety monitoring committee overseeing the trial recommended that the results of a recent interim analysis be made public because the study had met its primary endpoint of demonstrating improved overall survival in patients who received bevacizumab, which also means that it delayed the chance of dying from the disease.

Patients who received bevacizumab got a dose of 15 milligrams per kilogram (mg/kg) of body weight administered in the vein with their chemotherapy treatment and continued with this dose one day every three weeks until disease progression or unacceptable toxicity occurred. Those patients lived a median 3.7 months longer than those who did not receive bevacizumab. Patients treated with chemotherapy alone had a median survival of 13.3 months while those who received chemotherapy and bevacizumab had a median survival of 17 months. This survival difference was highly statistically significant. However, patients receiving bevacizumab experienced more side effects than those who did not. These side effects were consistent with side effects previously known to be associated with bevacizumab.

“The findings in this clinical trial are important because they are likely to change clinical practice and provide an opportunity to improve outcome in patients with recurrent cervical cancer who have previously had very limited treatment options,” said GOG study chair Krishnansu S. Tewari, M.D.

A total of 452 patients in the United States and Spain with metastatic, recurrent, or persistent cervical cancer not curable with standard treatment were enrolled between 2009 and 2012. The trial was designed to answer two questions: Whether topotecan in combination with paclitaxel was superior to cisplatin and paclitaxel in combination, and whether the addition of bevacizumab to either regimen improved overall survival.

The purpose of bevacizumab is to block the blood supply that feeds the tumor. The drug originally was approved for certain types of metastatic cancer in combination with chemotherapy and is designed to bind to and inhibit vascular endothelial growth factor (VEGF). VEGF is a protein that plays a critical role in tumor blood vessel growth.

“This is welcome news as progress has been very difficult against this cancer, and GOG physicians and patients who participated have made an important contribution,” said Jeff Abrams, M.D., clinical director of NCI’s Division of Cancer Treatment and Diagnosis.

It is estimated that over 12,000 women will be diagnosed with cervical cancer in the United States in 2013 and over 4,000 women will die of the disease.

Full data has been submitted to the American Society of Clinical Oncology 2013 Annual Meeting. The trial is GOG240, Paclitaxel and Cisplatin or Topotecan With or Without Bevacizumab for Treating Patients With Stage IVB, Recurrent, or Persistent Cervical Cancer, clinical trial registry number NCT00803062.