Beyond the “Go Kit”: Empowering Older Adults in Disasters 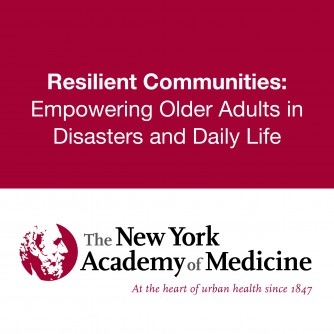 Newswise — Drawing on the lessons of Superstorm Sandy, a new report from The New York Academy of Medicine (NYAM), “Resilient Communities: Empowering Older Adults in Disasters and Daily Life,” presents an innovative set of recommendations to strengthen and connect formal and informal support systems to keep older adults safe during future disasters.

Following the 2012 superstorm, tens of thousands of older adults were isolated in high-rise buildings and private homes, in need of food, water, heat, medical attention, and medication. This unprecedented report looks at not just the vulnerabilities of older adults, but at the role many can play in leading and supporting their communities during disasters. Its findings are especially important for policymakers; city, state, and federal agencies; community and faith-based organizations; health care and housing providers; and emergency management personnel. While the report looks at the experience of older adults in New York City, it has implications for communities across the U.S.

“Older adults have unique needs during disasters, but also unique strengths to offer in supporting their communities,” said Jo Ivey Boufford, MD, NYAM President. “With extreme weather projected to increase, a new strategy is required to keep older adults, who are often among New York City’s most long-term, civically engaged residents, safe. Older people are also effective first responders, and should be seen as problem solvers in disasters rather than problems to be solved.”

New York City’s 1.4 million people age 60 and over constitute 17 percent of the city’s total population. This number is projected to increase by 50 percent over the next 20 years. Efforts to increase individual preparedness among older people through the creation of “go-bags” and the stockpiling of supplies have been repeatedly undertaken, but this approach is not enough. Vulnerable populations face significant barriers in attempting to prepare, including lack of funds, transportation, and storage space, as well as difficulty reading maps and other preparedness content.

“Individual preparedness is important, but it doesn’t connect older adults with the resources and support they need in disaster situations,” said Lindsay Goldman, report author and Project Manager at NYAM. “We are calling for a paradigm shift towards a community preparedness model of disaster recovery from one of primary emphasis on individual preparedness. Resources are needed for enhancing communities’ social networks, connectedness, and integration of assets long before disaster strikes.”

The report draws on data collected immediately after Superstorm Sandy, and interviews with older adults, experts, and leaders of community-based organizations in affected neighborhoods. It presents four key findings about the experience of older adults post-Sandy:• Formal and informal social networks influenced older adults’ decisions and facilitated their access to information and assistance.• Because older people had not been engaged in emergency planning, emergency services were often inadequate, inappropriate, or inaccessible, and basic and health care needs went unmet. • Older adults actively supported their communities before, during, and after Superstorm Sandy. • The local neighborhood infrastructure was a critical factor in meeting the needs of older people within affected communities.

The report recommends 12 action steps toward community preparedness, including establishing community planning hubs in each neighborhood, supporting landlords with large concentrations of older adults, enacting a pharmacy law for disasters, and consulting with home health care and hospice providers on emergency plans.

Funded by the New York Community Trust and the Altman Foundation, the report builds on the platform of Age-friendly New York City, a public-private partnership led by NYAM to enhance city life for older adults.

About The New York Academy of MedicineThe New York Academy of Medicine advances the health of people in cities. An independent organization since 1847, NYAM addresses the health challenges facing the world’s urban populations through interdisciplinary approaches to policy leadership, innovative research, evaluation, education, and community engagement. Drawing on the expertise of diverse partners worldwide and more than 2,000 elected Fellows from across the professions, our current priorities are to create environments in cities that support healthy aging; to strengthen systems that prevent disease and promote the public’s health; to eliminate health disparities; and to preserve and promote the heritage of medicine and public health. For more information, visit www.nyam.org.