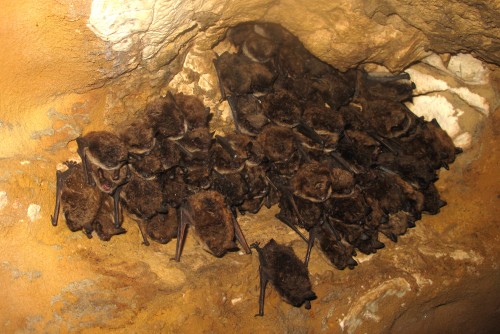 A cluster of Little Brown Myotis bats in the newly explored Alberta cave. Unlike in eastern caves, most hibernation sites in northern and western regions contain only a few hundred bats at most.

Newswise — (Alberta – March 16, 2017) The Wildlife Conservation Society Canada and Alberta Environment and Parks announced today the discovery last month of the largest Alberta bat hibernation site (based on estimated bat count) ever recorded outside of the Rocky Mountains.

The newly-discovered cave is being used as a hibernaculum by at least 200 Little Brown Myotis bats, listed as Endangered under Canada’s Species at Risk Act. Formed by weak sulphuric acid dissolving bedrock, conditions in the narrow, muddy cave make it impossible to fully inspect hand-sized pockets, cracks and fissures that compose roosting sites. “This means population numbers could be significantly higher,” suggests Dave Hobson, Senior Wildlife Biologist of Alberta Environment and Parks.

Said Dave Critchley of the Northern Alberta Institute of Technology (NAIT), who co-coordinates WCS Canada’s BatCaver program in Alberta, and was one of the cave explorers: “Finding a cave in Alberta’s boreal forest inhabited by several hundred bats is a real breakthrough. It demonstrates that this kind of bat habitat may well exist in other non-mountainous areas throughout the boreal forest.”

Said Shannon Phillips, Minister of Environment and Parks: “This is a fascinating and important find. Understanding where Alberta’s different bat species are living is a crucial part in preventing the spread of white-nose syndrome and in protecting sensitive habitats.”

The discovery of hibernation spots has become extremely urgent in western Canada since the 2016 discovery of white-nose syndrome (WNS) in Washington State. Bats with WNS are infected with a fungus that wakes the individual bats and forces them to burn through their precious stored winter fat long before the return of insect season. It spreads throughout hibernation sites and can kill more than 90 percent of resident bats. WNS has devastated bat colonies in Eastern North America and could be about to erupt in the West.

Said Greg Horne, who is co-leading the BatCaver efforts in Alberta: “Cavers are helping to locate hibernacula so that more can be learned about the bats before the disease arrives.”

The four-person crew that explored the Alberta cave collected DNA and guano samples for analysis. In addition, they placed ultrasonic bat detectors along with temperature and humidity loggers in the cave to learn more about this newly discovered bat colony, including when the bats are entering and exiting the cave and more about their behavior during hibernation.

Said WCS Canada Associate Conservation Scientist and bat specialist Dr. Cori Lausen: “Bats are the No. 1 nocturnal consumer of insects such as mosquitos. Losing vast numbers of the night-feeders will have cascading impacts for backyard enthusiasts and ecosystems, and for industries such as forestry and agriculture. It’s urgent we develop plans for protecting bats and ensuring they are in a position to eventually recover should WNS hit the western provinces.”