Ad is part of new 96 Elephants campaign: “Take a Stand for Elephants” 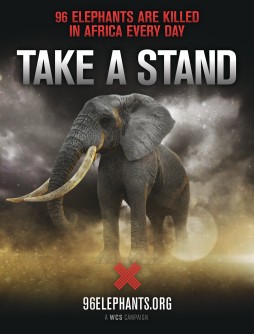 • “Don’t be the generation that allowed elephants to go extinct,” warns Joel• Ad is part of new 96 Elephants campaign: “Take a Stand for Elephants”• 96 Elephants are killed every day in Africa

Joel’s voice is heard in a series of new ads supporting the Wildlife Conservation Society’s (WCS) 96 Elephants campaign – so named for the number of elephants slaughtered each day by poachers.

With the backdrop of computer-animated elephants coming to life from shards of ivory, Joel’s voiceover warns: “We can’t turn back time, but we can reverse this trend. Don’t be the generation that allowed elephants to go extinct.”

The “Take a Stand for Elephants,” campaign was conceived and developed for 96 Elephants by pro bono partner, Steve Harper, founder of ThisisBonaFide.com. Harper is an independent creative director, designer, and animator based in New York. The campaign will appear across television, radio, print, digital, and OOH channels and media will be activated by Horizon Media, working on behalf of 96 Elephants. Additionally, Quinn will continue to serve as the public relations partner for the 96 Elephants effort.

Last year, Joel wrote a passionate, open letter published on his website: “I am a piano player. And I realize that ivory piano keys are preferred by some pianists…but a preference for ivory keys does not justify the slaughter of 96 elephants every day. There are other materials which can be substituted for piano keys. But magnificent creatures like these can never be replaced. Music must never be used as an excuse to destroy an endangered species. Music should be a celebration of life — not an instrument of death.”

Said John Calvelli, WCS Executive Vice President of Public Affairs and Director of the 96 Elephants campaign: “Through his timeless music, Billy Joel has become a cultural icon and has spoken out for many important causes. Now, Billy Joel has taken a stand for elephants, and for that we are extremely grateful.”

Said Bill Koenigsberg, President, CEO, and founder of Horizon Media. “Since partnering with The Wildlife Conservation Society last year, 96 Elephants have seen incredible momentum to protect elephants by securing effective US moratorium laws, bolstering elephant protection with additional funding, and educating the public about the link between ivory consumption and the elephant poaching crisis. We have come a long way but more needs to be done and we are excited to have Billy Joel lend his star power to the 96 Elephants movement.”

96 Elephants brings together world citizens, partners, thought leaders, and change makers to leverage collective influence to stop the killing of elephants, stop the trafficking, and stop the demand for ivory. Working with campaign members, which includes 195 partners including 125 zoos across 45 states, 96 Elephants has helped banned ivory sales in New York and New Jersey and is currently supporting proposed bans in California – the largest ivory market after New York – and across the United States.

96 ElephantsWCS is leading global efforts to save Africa’s elephants and end the current poaching and ivory trafficking crisis. In September 2013, WCS launched its 96 Elephants campaign to amplify and support the Clinton Global Initiative (CGI) “Partnership to Save Africa’s Elephants” by stopping the killing, stopping the trafficking, and stopping the demand. The WCS campaign focuses on: securing effective moratoria on sales of ivory; bolstering elephant protection; and educating the public about the link between ivory consumption and the elephant poaching crisis. www.96elephants.org

About Horizon MediaHorizon Media, Inc. is the largest and fastest growing privately held media services agency in the world. The company was founded in 1989, is headquartered in New York and has offices in Los Angeles, San Diego, and Chicago. Horizon Media was chosen as 2011 Independent Media Agency of the Year by Mediapost, 2010 U.S. Media Agency of the Year by Adweek, Brandweek, and Mediaweek as well as by Ad Age and as one of the world’s ten most innovative marketing and advertising companies by Fast Company in 2011. In 2012, Bill Koenigsberg, President, CEO and Founder, was honored by Advertising Age as Industry Executive of the Year. Most recently, in 2014, Bill Koenigsberg was named 4As Chair of the Board and is the first person from a media agency to hold this prestigious position in the 100 year history of the 4As, the marketing industry’s leading trade association.

The company’s mission is “To create the most meaningful brand connections within the lives of people everywhere.” By delivering on this mission through a holistic approach to brand marketing, Horizon Media has become one of the largest and fastest-growing media agencies in the industry, with estimated billings of over $5.2 billion and over 1000 employees.

About Quinn Quinn is a lifestyle public relations agency with global impact. The agency’s disciplined strategic approach to PR has built some of the largest audiences in the world. With offices in New York and Miami and affiliates worldwide, Quinn serves clients in travel, real estate, spa, experiences and retail as well as many food, wine & spirits brands. Working collaboratively to develop narrative-based ideation, Quinn produces strategies that capture the attention of today's sophisticated consumer. In addition, Quinn integrates multiple communication channels with partnerships, events and ideation to produce work that is highly effective—and measurable.

Quinn’s innovative initiatives, which are recognized globally, have resulted in a number of industry "firsts", including for such clients as the Waldorf Astoria, Guerlain Spa, Etihad Airways, and The Ritz Carlton Residences. www.quinn.pr