“The Global Obama: Crossroads of Leadership in the 21st Century" 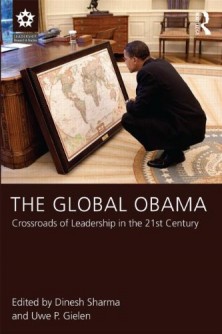 The Global Obama: Crossroads of Leadership in the 21st Century, analyzes the president’s image in five continents and more than 20 countries.

The Global Obama: Crossroads of Leadership in the 21st Century, co-edited with Uwe P. Gielen (Routledge, 2014), analyzes the president’s image in five continents and more than 20 countries. It is the first book to look at how Obama and America are viewed by a variety of political commentators and governments from around world.

“Coming from a multinational, multiracial, multicultural and multireligious family with roots in North America, Africa, Asia and several Pacific islands, Barack Obama is his country’s first global president and the first to endorse a truly multicultural identity both for himself and his country,” says Sharma, author of an earlier book, Barack Obama in Hawaii and Indonesia: The Making of a Global President, which was rated as one of the Top Ten Black History Books for 2012 by the American Library Association, Book List Online. “Moreover, our research has found that Obama’s childhood also prepared him for a deeper understanding of global problems and developments, especially those influenced by ongoing economic, political, military and cultural developments in Pacific Rim countries.”

Sharma scaled the globe to gather opinions − cultural, historical and political analyses − about Obama’s leadership style. Writers, journalists, psychologists and social scientists were interviewed about their views on Obama’s leadership, popularity and many of the global challenges that remain unsolved.

As a progress report, this is the first book that tries to grasp ‘the Obama phenomenon’ in totality, as perceived by populations around the world, with a special focus on America's leadership in the 21st century.

This social, psychological and cultural analysis, presented in 24 chapters, focuses on Obama’s attempts to provide global leadership. Sharma and Gielen assess Obama’s efforts in light of the current literature on leadership as well as how he is perceived and judged by the general public.

“While Obama remains more popular in many parts of the world than at home, there is a growing perception that his pursuit of progressive goals is undermined by his realpolitik (politics or diplomacy based primarily on power as well as practical and material factors and considerations), which tends to sacrifice these goals at the altar of perceived American security, political and economic interests, especially in Muslim-majority nations in the Middle East, North Africa and South Asia,” says Sharma. Obama’s “Asian Pivot” within the context of American Exceptionalism is a special focus of the book, including the President’s attempts to shape the relationship between the United States and China in the face of China’s increasing economic and military power.

Sharma is a cultural psychologist, marketing consultant and acclaimed author with a doctorate from Harvard University. Currently, he is an associate research professor at Binghamton University’s Institute for Global Cultural Studies; a senior fellow at the Institute for International and Cross-Cultural Research, NYC; and a columnist for Asia Times Online, Al Jazeera English and The Global Intelligence, among other syndicated publications.