Binghamton U. Students Develop Affordable Mechanical Prosthetic Hand for Campus Employee Who Lost Her Hand at 18

Susan Reigel, 55, who has worked as a university dining services employee for the past three years, lost her right hand in an industrial accident, as a teenager 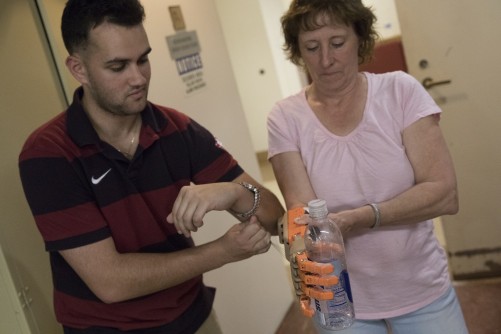 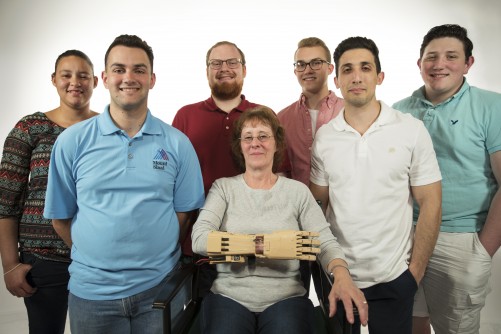 Mechanical prosthetic hand recipient with Binghamton U. students who created it for her.

Newswise — When a group of six Binghamton University biomedical engineering students launched a collaboration to create a functional biomechanical hand using 3D printing technology one year ago, their thoughts turned to an amputee whom they would often see every day, and to the opportunity to improve her life.

Susan Reigel, 55, who has worked as a campus dining services employee for the past three years, lost her right hand in an industrial accident, as a teenager. “Sue lost her right hand 37 years ago,” says Dr. George Catalano, professor of biomedical engineering, who oversees the student-driven project, “and the students already knew her and found her approachable, so two of them agreed to talk with her about the prosthetic-project opportunity, and she was very receptive to the idea.”

The student team includes six seniors, all majoring in biomedical engineering and all graduating from Binghamton University, on May 20th:  Adam Adler; Jacob Praga; Jacob Vogel; Trey McIntyre; Victoria D’ambrosio; and Nico Summa.  “They are a great group of kids who I have grown very fond of,” says Sue Reigel.

According to Professor Catalano, the university’s biomedical engineering department hasn’t been involved in prosthetics before, so these six undergrad students teamed up for the project as a way to pursue a new focus in an area of professional interest to them, which also has much potential to help others. Catalano helped guide the student team through the design process and has made sure they met all necessary deadlines.  “Funding came from the $100 each student was provided for their senior project,” he says. With a total of $600, the team is currently under budget, as they put the finishing touches on the mechanically functioning prosthetic hand.

“The primary goal of this project was to utilize our team’s various skill sets to collectively design a custom prosthetic for our client—Sue—that would improve her quality of life,” explains student team member Trey McIntyre. “A secondary goal was to create a device that could pioneer the way for a new generation of prosthetics that offer moderate complexity at an affordable price,” adds student Jacob Vogel. “Additionally, we hope that this project will generate a passion for prosthetics on this campus that will lead to the creation of biomechanics or prosthetics focused track in the Biomedical Engineering program.”

Sue Reigel’s new hand was completed in April, and is going through some final aesthetic improvements. “With her new hand, she will be able to hold at least 10 pounds while maintaining full mechanical and electrical functionality,” says team member Nico Summa. “The fields of 3D printing and prosthetics are rapidly expanding, and access to printable prosthetic designs and 3D printers is becoming more common across the globe,” Summa says. “We will be covering the prosthetic with a silicone ‘glove’ molded to fit the prosthetic that will act as an artificial skin.

A video link showcasing the team and the recipient of the new prosthetic hand: https://youtu.be/naOFT529DbY

While Sue’s quality of life will be changed forever, so has her perspective on the Binghamton University campus. “I was honored that the team chose me as the person to make a hand for—because they could have easily chosen someone else among the people [who live] in this area,” she says. “For the team to try and make a few things possible for me to do again, with another hand, after all these years, means the world to me.”

The prosthetic-hand project hasn’t only impacted Sue’s life, but it has changed the lives and minds of the six students working on it.  “The project has changed my entire perspective on biomedical engineering,” says Victoria D’ambrosio. “Prior to working with the group, I was more geared towards research…however, working with Sue has opened my eyes to a more Samaritan role in the field, where I can give back to the community and witness the immediate implications of innovation.” 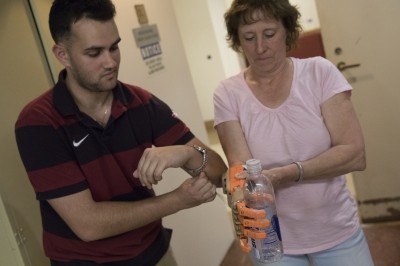 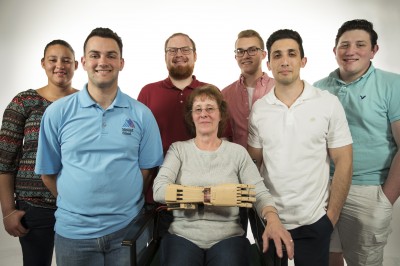 Caption: Mechanical prosthetic hand recipient with Binghamton U. students who created it for her.