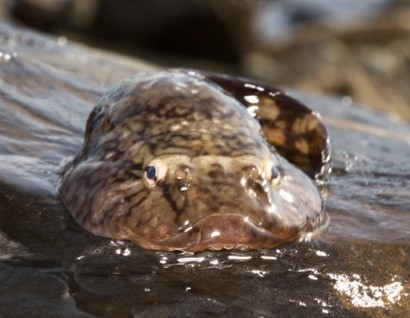 The northern clingfish (Gobiesox maeandricus) lives in Pacific Northwest waters, where it seeks out prey in the crashing waves of the intertidal 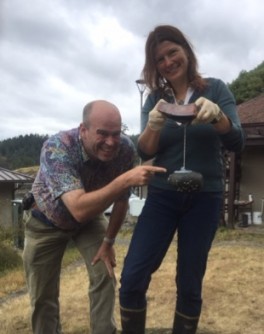 Adam Summers and Petra Ditsche collaborated to design a clingfish-inspired suction cup that can hold onto heavy objects or withstand high forces, enabling it to be deployed back in the rough marine environment

Newswise — Suction cups are getting a facelift. A shower caddy full of shampoo plopping into the bathtub may be an inconvenience in most cases, but failures like this limit the application of suction cups for more exacting purposes. Petra Ditsche, currently at the University of Alaska Anchorage, and her colleagues are changing that. To create prototype suction cups that are capable of glomming onto rough, wet surfaces and staying there, Ditsche has found inspiration in an aptly-named marine creature: the clingfish.

On the rocky shores of Washington State, clingfish maneuver over rocks to prey on limpets--dime-sized, snail-like invertebrates. A limpet is covered by a shell shield that hides soft organs, which are fair game if the predatory clingfish can pop it off the rock. Yet the clingfish faces its own foe: heavy forces from incoming waves that threaten to slosh it off the rocks as it searches for food. The clingfish, however, has developed a unique system for holding onto rocks by using a suction cup on its underside, which has been derived from pelvic and pectoral fins.

Unlike a typical plastic suction cup, a clingfish disc isn’t totally smooth—the edge of the surface resembles that of a tongue, covered in irregular features. Looking closer, these tiny projections branch out even further, forming a hierarchy of structure. This provides the key to the clingfishes’ tenacity: the friction generated from these little hairs allows the suction disc to remain staunch when the edges of typical plastic suction cups would be pulled in, eventually lifting off to break the seal. In a world where clingfish are buffeted by crashing waves, the suction disc allows them to remain in place even when forces 150 times their body weight are applied.

Ditsche and her colleagues are interested in biomimicry, a field that uses nature’s solutions, refined in some of the toughest environments, for our own applications. This field of study has given us bullet trains shaped like kingfisher beaks, Velcro inspired by the burrs of plants, and fabric that glides through the water almost as well as shark skin.

Biomimicry is not about creating a one-to-one replica of the original inspiration, Ditsche says. Instead, it requires understanding of the underlying mechanisms so that the technology can be employed in a simplified yet useful manner. Ditsche has focused on replicating both the adaptability of the material to rough surfaces and the high friction at the margins of the suction cup that prevent the cup from being dislodged easily. Initial tests have shown that these biomimetic models have a grip of up to 70,000 Pascals on rough surfaces, equivalent to the pressure of 10 great white sharks stacked upon an office desk.

Ultimately, these super suction cups could be deployed during surgeries to pull tissue out of the way without risk of puncture or for use when climbing wet surfaces. Currently, they are slated to return to the waters where the clingfish that inspired them reside: the Puget Sound in Washington. Here, a population of endangered orca whales is tracked and carefully monitored by researchers. Once field-tested, these suction cups could provide a way to attach tracking tags in a less-invasive manner than current techniques. Bio-inspired design is re-entering the natural world to allow for even more research, taking any splashes in stride.