Biochemical Signals Associated with Atherosclerosis May Damage Other Organs 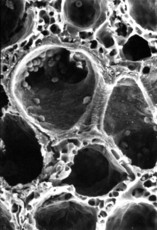 Biochemical signals associated with atherosclerosis may damage other organs, researchers say. Shown is a blood vessel viewed under a high-powered microscope.

Newswise — Many scientists view atherosclerosis, or hardening of the arteries, as a localized disease characterized by the build up of fatty plaques in the arteries, which can eventually cause heart attacks and strokes. Now, in a finding that challenges conventional knowledge, researchers in New York and North Carolina report that plaques formed in arteries are associated with certain harmful chemical reactions that can contribute to damage in the lungs, liver, and other organs.

The findings suggest that the effects of atherosclerosis are more widespread than previously believed, the researchers say. The study could lead to new targets for developing drugs that could help prevent or reduce these chemical changes that appear to accompany heart disease, the number one cause of death in the U.S. Their study was presented today at the 235th national meeting of the American Chemical Society.

"Our findings add new knowledge to the big melting pot of this complex disease called atherosclerosis," says study leader Rita Upmacis, Ph.D., a chemist at Weill Medical College of Cornell University in New York. "I anticipate that future research will establish whether the harmful protein modifications we observed in animal organs can be prevented and provide the basis of new treatments for the disease."

Scientists are closing in on the root causes of the disease. One of the more promising lines of research focuses on the interaction between certain highly reactive nitrogen molecules and proteins. Under certain conditions, this interaction produces nitrotyrosine, which has been linked to Alzheimer's, arthritis, cancer, and other disorders. However, scientists know little about the role of nitrotyrosine in atherosclerosis.

Upmacis and colleagues also conducted a related experiment in atherosclerotic mice lacking the gene that makes nitric oxide synthase (iNOS), an enzyme that orchestrates accumulation of nitrotyrosine in proteins. In association with prior findings that iNOS gene deletion limits the formation of atherosclerotic plaques, the new study showed that nitrotyrosine accumulation in proteins is reduced in diverse organs when iNOS is absent.

"The findings support an emerging view that iNOS could be a new target for treating atherosclerosis and that limiting nitrotyrosine accumulation in the lungs, liver, and other organs could help fight the damaging effects of the disease," Upmacis says. "But the trick will be to develop a drug to block this pathway without causing any unwanted side effects."

Potentially, the accumulation of nitrotyrosine in the blood can be utilized as a diagnostic test to track atherosclerosis and provide a clearer picture of damage to organs, the researchers say.

Funding for the study was provided by the National Institutes of Health and Philip Morris (USA and International).

The paper on this research, BIOL 152, will be presented at 2:00 p.m. on Wednesday, April 9, at the Morial Convention Center, Rm. 230, during the symposium, "Enzymes and Pathways."

ALL PAPERS ARE EMBARGOED UNTIL DATE AND TIME OF PRESENTATION, UNLESS OTHERWISE NOTED The paper on this research, BIOL 152, will be presented at 2:00 PM, Wednesday, April 9, 2008, during the symposium, "Enzymes and Pathways." BIOL 152Inducible nitric oxide synthase contributes to biopterin oxidation and protein tyrosine nitration during atherogenesis Program Selection: Division of Biological ChemistryTopic Selection: Enzymes and Pathways

Abstract During cardiovascular disease, nitric oxide (NO) bioactivity is reduced and peroxynitrite formation is enhanced. Peroxynitrite contributes to protein 3-nitrotyrosine (3-NT) formation and oxidation of the NO synthase (NOS) cofactor, tetrahydrobiopterin (BH4). The present study sought to (i) quantify the extent to which 3-NT in proteins accumulates and BH4 becomes oxidized in organs of atherosclerotic mice and (ii) determine the specific contribution of inducible NOS (iNOS) to these processes. Robust accumulation of 3-NT and oxidized BH4 was evident in organs of atherosclerotic mice fed a Western (atherogenic) diet and iNOS-derived species were determined to be responsible. Since BH4 oxidation can switch the predominant NOS product from NO to superoxide, we predict that progressive NOS uncoupling is likely to drive atherogenic vascular dysfunctions. ________________________________________Researcher Provided Non-Technical Summary Briefly explain in lay language what you have done, why it is significant and what are its implications (particularly to the general public)

Atherosclerosis is a disease that causes thickening of the arterial wall and is responsible for more deaths in the U.S. than any other condition. Nitric oxide (NO) is an important gas that relaxes blood vessel walls, but its bioavailability during atherosclerosis is diminished. Rampant reactive oxygen species seem to be culprits that remove beneficial NO from the vasculature and transform it into a toxic substance, known as peroxynitrite. Peroxynitrite wreaks havoc by causing protein tyrosine nitration as well as hampering the function of enzymes vital for maintenance of the blood vessel wall. In this study, we showed that protein tyrosine nitration is increased in atherosclerotic mice fed a high fat diet and quantified nitration levels in different organs. Furthermore, we showed that tetrahydrobiopterin (BH4), an important cofactor of the enzyme NO synthase, is oxidized in organs of atherosclerotic mice. BH4 oxidation is known to shift the enzyme from producing NO to producing troubling reactive oxygen species that further exacerbate the disease. Using gene-targeted mice, we determined that the inducible form of NO synthase provides the source of NO that, in concert with reactive oxygen species, causes the protein tyrosine nitration and BH4 oxidation observed in these studies. These reactions are predicted to lead to vascular dysfunction encountered in atherosclerosis.

This is completely new work. Atherosclerosis is usually associated with plaque formation in arteries, but using a mouse model of atherosclerosis, we have demonstrated that the effects of this disease are more widespread - affecting levels of protein tyrosine nitration in the heart, liver and lungs.