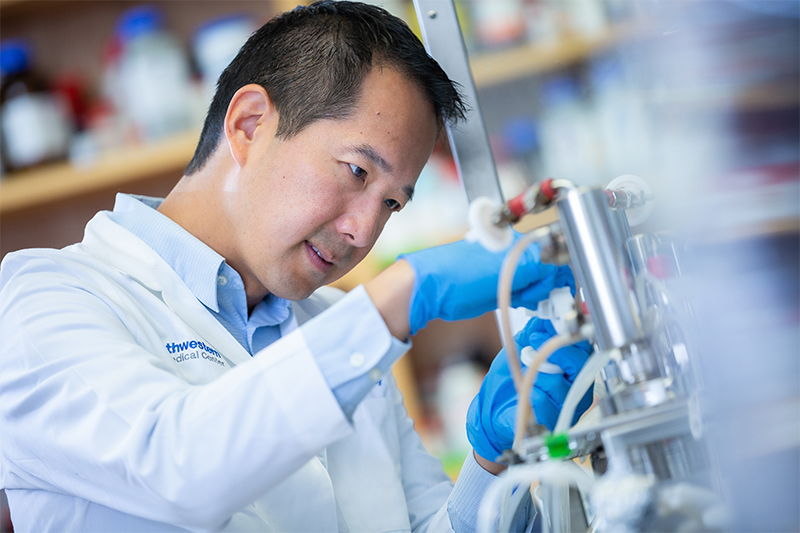 Biochemist Benjamin Tu conducts basic research into how metabolism regulates cellular function, work that could lead to greater understanding of many diseases.

Newswise — DALLAS – Jan. 13, 2020 – Benjamin Tu, Ph.D., a professor of biochemistry at UT Southwestern whose basic science research into cellular function could lead to greater understanding of diseases including cancer, has been named a recipient of the 2021 Edith and Peter O’Donnell Award in Science, presented by The Academy of Medicine, Engineering and Science of Texas (TAMEST).

TAMEST presents the annual awards to recognize the achievements of early career Texas investigators in the fields of science, medicine, engineering, and technology innovation. This year’s awards were announced today during the final day of its annual conference, which was held virtually. The awards come with a $25,000 honorarium and an invitation to make a presentation before TAMEST members. Tu will make his virtual presentation Feb. 24.

Tu is the 15th scientist at UT Southwestern to receive the award since TAMEST initiated the O’Donnell Awards in 2006.

“It’s an honor to be selected,” Tu says of the prize. “It was certainly welcome news during very challenging times.”

The Edith and Peter O’Donnell Awards are given to scientists for their contributions “addressing the essential role that science and technology play in society, and whose work meets the highest standards of exemplary professional performance, creativity and resourcefulness,” according to TAMEST.

“We believe Dr. Tu’s research will lead to future therapeutic advancements for diseases,” says David E. Daniel, Ph.D. (NAE), 2021 TAMEST board president. “As a pioneer in his field, we are honored to recognize him as the recipient of our 2021 O’Donnell Award in Science and are grateful for the discoveries he is making here in Texas that will impact the rest of the world.”

Margaret Phillips, Ph.D., professor and chair of biochemistry, nominated Tu for the award. “Ben is an incredibly talented scientist,” Phillips says. “You could almost see him as a detective. He digs into the nuts and bolts of how cells are functioning and regulating themselves.”

Tu’s research focuses on how metabolism regulates cellular functions. Two of his recent areas of investigation have obvious potential for future advances in clinical treatment.

In two 2019 studies, both published in Cell, Tu reported that ataxin-2, a protein with a known link to ALS, or Lou Gehrig’s disease, is necessary for cells to do the work of clearing out damaged or unneeded parts in a process known as autophagy. Without the protein, cells are more likely to die, he said

In a 2011 study published in Molecular Cell, Tu described how the metabolite acetyl-CoA plays a key role in turning on the genes necessary for cell growth.

“At the time, few scientists accepted the idea that a metabolite could have such an important role in regulating gene expression,” says Tu. “Historically, the field had thought that transcription factors (proteins involved in transcribing the genetic information contained in DNA) dictate what genes are turned on.”

This new understanding of the importance of acetyl-CoA led to further research by Tu and a 2014 Cell paper that reported how the metabolite might be important for the survival and growth of liver cancer cells. His current research in mice will investigate if chemicals that inhibit acetyl-CoA might slow the growth of pancreatic cancer cells.

Tu came to UT Southwestern in 2004 after receiving master’s and bachelor’s degrees in chemistry from Harvard University and a Ph.D. in biochemistry and biophysics from the University of California, San Francisco. He worked as a postdoctoral fellow under Steven McKnight, Ph.D., professor of biochemistry, before joining the UTSW faculty as an assistant professor of biochemistry in 2007. Tu holds the Martha Steiner Professorship in Medical Research, and is a W.W. Caruth, Jr. Scholar in Biomedical Research.

His previous honors include the Norman Hackerman Award in Chemical Research from The Welch Foundation in 2014 and recognition as a three-time finalist for the prestigious Blavatnik Awards for Young Scientists – in 2017, 2018, and 2019. He is also a UT Southwestern Presidential Scholar.