7-Jan-2020 10:10 AM EST, by Earth Institute at Columbia University
favorite_border 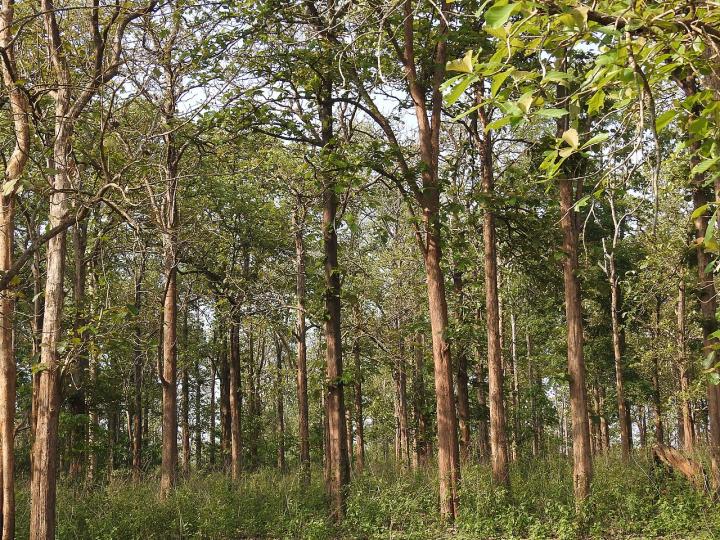 Teak (Tectona grandis) in a timber plantation stands unharvested in a protected area in Karnataka, India.

A panorama shot of a teak (Tectona grandis) plantation (left) and moist-deciduous forest (right) in a protected area in Karnataka, India.

Newswise — As the effects of climate change are increasingly felt around the world, possible solutions, from reducing fossil fuel emissions to capturing carbon, have come to dominate policy discussions. Planting new forests and restoring existing ones have emerged as some of the best ways to capture CO2, since trees pull carbon out of the air during photosynthesis, then store it in their trunks and roots.

A new study, accepted in Environmental Research Letters, has found that diverse natural forests with a mix of tree species are more reliable and stable at absorbing and storing carbon than plantations dominated by just a few tree species, both over time and across diverse conditions. The study was co-authored by scientists from Columbia University's Earth Institute and its Department of Ecology, Evolution and Environmental Biology.

The study looked at forests in India, where conservation laws have led to the preservation of both natural forests and former timberlands. It compared the ability of both kinds of forest to capture and store carbon in wet and dry conditions in five reserves in a mountainous region known as the Western Ghats. Among the study areas were former teak and eucalyptus plantations that have not been harvested for timber in recent years, as well as species-rich evergreen and deciduous tropical forests that were selectively logged until 1980.

The history of forest management and conservation in the Western Ghats make it an ideal location for such a study, said lead author Anand M. Osuri, a postdoctoral fellow at the Earth Institute and the Nature Conservancy. Many nature reserves in the Western Ghats include areas that were formerly managed as plantations. This creates a neat natural experiment for comparing natural forests and mature plantations under similar climatic and environmental conditions.

In field studies, the researchers analyzed tree-species richness and measured tree height and girth at one site, using this information to calculate the trees' above-ground biomass and carbon storage. Carbon capture rates, meanwhile, were estimated across all the sites using satellite detection of photosynthetic activity across a broad geographic area.

The study revealed a somewhat complex picture when it comes to carbon storage. Teak and eucalyptus plantations stored 30 to 50 percent less carbon than the natural evergreen forests, but nearly as much carbon as the moist-deciduous forests. But the natural forests showed higher stability of carbon capture across years, and especially proved their mettle in dry conditions. While tree plantations captured 4 to 9 percent more carbon than the evergreen and deciduous forests during wet seasons, they fared far worse during dry seasons, with a carbon capture rate up to 29 percent lower than that of the natural forests.

Because climate models show that global warming will worsen droughts, the ability of natural forests to soak up carbon even during dry seasons was important, the authors say. The study concluded that even though tree plantations rival some natural forests for carbon capture, the plantations were unlikely to match the stability and hence reliability of carbon capture exhibited by forests, particularly in the face of increasing droughts and other climate disruptions. That holds critical lessons for conservationists and government officials, the authors say.

Greater stability of carbon capture in natural forests is one of several reasons why policies for protecting and regenerating such forests should be prioritized over raising plantation monocultures, Osuri said.

In addition to enhancing carbon storage, he added, such policies could also offer a much-needed boost to biodiversity conservation.

The examination of the success of natural forests versus tree plantations is especially timely. Recent international agreements, including the Bonn Challenge and the Paris Climate Accord, call for increases in tree cover as a way to address global warming. The study noted a worrisome trend, however: Tree plantations comprised of only a few species have expanded in recent decades, while mixed forests, especially those found in tropical areas, have contracted.

In India, the government has devoted significant resources to restoring natural forests. Still, more than half of the areas India reforested between 2015 and 2018 consisted of plantations with five or fewer tree species.

While it might be easier and cheaper to focus on one or two tree species in reforestation initiatives, the authors urged governments to deploy a broad variety of native trees species when looking at ways to ramp up carbon capture and stave off climate change.

Caption: A panorama shot of a teak (Tectona grandis) plantation (left) and moist-deciduous forest (right) in a protected area in Karnataka, India.