More than on/off switch, electric signals tell cells where & how to grow 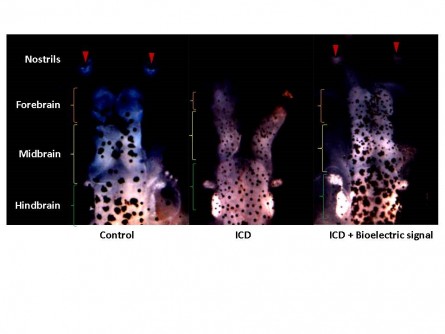 Embryonic cells communicate, even across long distances, using bioelectrical signals, and they use this information to know where to form a brain and how big that brain should be. These signals are more than an on/off switch; rather they function like software that enables a computer to carry out complex activities. Manipulating these signals can repair genetic defects and induce development of healthy brain tissue where it would not ordinarily grow. The control tadpole on the left has normal nostrils (red arrowheads), forebrain (orange brackets), midbrain (yellow brackets) and hindbrain (green brackets). In the middle tadpole, genetically defective Notch protein was injected, resulting in a severely reduced forebrain, misshapen midbrain and no nostrils. In the tadpole on the right, the research team first injected genetically defective Notch protein; then they "forced" proper bioelectrical signals which enabled the embryo to grow a much more normal brain despite the genetically defective material. This research from Tufts University means scientists may be able to induce growth of new brain tissue to address birth defects or brain injury, an exciting advance in regenerative medicine. (Black spots are skin-level pigment unrelated to brain development.)

Newswise — MEDFORD/SOMERVILLE, Mass. (March 11, 2015) -- Research reported today by Tufts University biologists shows for the first time that bioelectrical signals among cells control and instruct embryonic brain development and manipulating these signals can repair genetic defects and induce development of healthy brain tissue in locations where it would not ordinarily grow.

The research reveals that bioelectric signaling regulates the activity of two cell reprogramming factors (proteins that can turn adult cells into stem cells), which for the first time were analyzed in Xenopus laevis embryos, which share many evolutionary traits with humans. Results appear in the March 11, 2015, edition of the Journal of Neuroscience.

"We’ve found that cells communicate, even across long distances in the embryo, using bioelectrical signals, and they use this information to know where to form a brain and how big that brain should be," says the paper’s corresponding author Michael Levin, Ph.D., who holds the Vannevar Bush Chair in biology and directs the Center for Regenerative and Developmental Biology in the School of Arts and Sciences at Tufts. "The signals are not just necessary for normal development; they are instructive."

Levin uses an analogy to a computer. "Bioelectrical signals are not simply the switch that turns the computer on or off, passively allowing it to perform its functions. They actually carry important information, functioning like the software that enables the computer to carry out complex activities."

These bioelectric signals are implemented by changes in the voltage difference across cell membranes – called the cellular resting potential -- and the patterns of differential voltages across anatomical regions.

Overriding Genetic Defects"This latest research also demonstrated molecular techniques for 'hijacking' this bioelectric communication to force the body to make new brain tissue at other locations and to fix genetic defects that cause brain malformation," says Levin. "This means we may be able to induce growth of new brain tissue to address birth defects or brain injury, which is very exciting for regenerative medicine."

A case in point is the Notch signaling pathway, a protein signaling system that plays a role in neural cell growth and differentiation in mammals and most other multicellular organisms. Defects in Notch signaling disrupt brain development and are also associated with disorders such as T-cell acute lymphoblastic leukemia and multiple sclerosis. The research team found that using molecular techniques to force proper bioelectrical states in cells enabled them to override the defects induced by Notch malfunction, resulting in a much more normal brain despite a genetically-defective Notch protein.

"Using bioelectric signals to control tissue shape doesn't require micromanaging the genetics of the cells, which can have severe adverse effects," notes Vaibhav Pai, Ph.D., first author on the paper and research associate in the Levin lab.

Additional authors on the paper are Joan M. Lemire, and Jean-Francois Pare, research associates in the Department of Biology and Center for Regenerative and Development Biology at Tufts, and Gufa Lin and Ying Chen, of the Stem Cell Institute at the University of Minnesota.

Tufts University, located on three Massachusetts campuses in Boston, Medford/Somerville and Grafton, and in Talloires, France, is recognized among the premier research universities in the United States. Tufts enjoy a global reputation for academic excellence and for the preparation of students as leaders in a wide range of professions. A growing number of innovative teaching and research initiatives span all Tufts campuses, and collaboration among the faculty and students in the undergraduate, graduate and professional programs across the university's schools is widely encouraged.

The content of this release is solely the responsibility of the authors and does not necessarily represent the official views of the funders.