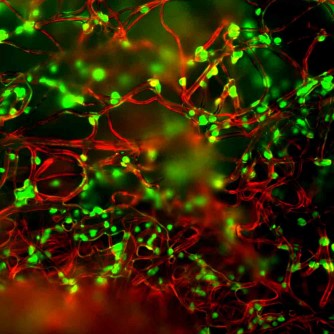 A current bottleneck in these approaches and other Adoptive T-cell Therapies (ACTs) is the production of sufficient numbers of high quality T cells. As a starting material, cells are isolated from the patient and then modified and grown outside the body in a bioreactor. This is still a new manufacturing challenge in medicine, and lack of a therapeutic number of cells is a frequent point of failure in ACT. In addition to technical challenges faced in consistent production of cells, T cells from patients undergoing treatment for cancer often show reduced function due to the disease, and are particularly difficult to grow.

A Columbia Engineering team has developed a new method for improving T-cell manufacture by focusing on the materials involved in this process. The team is a collaboration between Biomedical Engineering faculty Lance C. Kam and Helen H. Lu, whose research programs include immune engineering and smart biomaterial design. Their study, which is published today in Advanced Biosystems, uses a polymer mesh to activate the T cells, a critical step for their production. This approach simplifies processing compared to systems in use today. In addition, making the fibers out of a mechanically soft material improved T-cell growth, outperforming the current gold standard on several fronts.

“Our report shows that this soft mesh material increases the number of functional cells that can be produced in a single step,” Kam says. “In fact, our system provided nearly an order of magnitude more cells in a single process. What’s especially exciting is that we’ve been able to expand cells isolated from patients undergoing treatment for leukemia. These cells are often very difficult to activate and expand, and this has been a barrier to using cellular immunotherapy for the people who need it.”

In testing the effect of a softer material on T-cell production, the team was inspired by the field of mechanobiology. Researchers have known that other cell types can sense the mechanical stiffness of a material. For example, the rigidity of a material used to culture stem cells can direct differentiation, with a softer material promoting production of neuron while a stiffer substrate encourages bone cell differentiation. This effect can be as strong as the chemicals normally used to direct differentiation. However, a similar effect was unexpected in T cells for activation.

“This makes sense for cells normally involved in force-related activities, like muscle cells or fibroblasts that are involved in wound closure and healing. Our group was one of the first to explore this possibility for T cells, which are not associated with such functions,” Kam notes. These early experiments, involving his Microscale Biocomplexity Laboratory group, discovered that T-cells can sense the mechanical rigidity of the materials commonly used in the laboratory. To turn this into a clinically useful system, his group partnered with Lu’s Biomaterials and Interface Tissue Engineering Laboratory to create a microfiber-based platform.

Beyond simplifying the process of cell expansion and improving T-cells expansion, Kam and Lu envision that the mesh platform will have applications beyond immunotherapy. They are refining their platform and exploring how T cells from cancer patients respond to their materials. Says Lu, “It is truly exciting to see how these bioinspired matrices can direct cell function and be successfully used for T-cell therapy.”

The study was supported in part by the National Institutes of Health (AI110593 to L.C.K.), the National Science Foundation (through a GRFP to S.D. and A.P.D.), and the Columbia-Coulter Translational Research Partnership. J.R.B. has been supported by the Leukemia and Lymphoma Society (TRP# 6289-13) and the American Cancer Society (RSG-13-002-01-CCE), with the DFCI CLL Biorepository particularly supported by the Melton Family Fund for CLL Research, the Susan and Gary Rosenbach Fund for Lymphoma Research, and the Okonow Lipton Family Lymphoma Research Fund.

Columbia Engineering
Columbia Engineering, based in New York City, is one of the top engineering schools in the U.S. and one of the oldest in the nation. Also known as The Fu Foundation School of Engineering and Applied Science, the School expands knowledge and advances technology through the pioneering research of its more than 200 faculty, while educating undergraduate and graduate students in a collaborative environment to become leaders informed by a firm foundation in engineering. The School’s faculty are at the center of the University’s cross-disciplinary research, contributing to the Data Science Institute, Earth Institute, Zuckerman Mind Brain Behavior Institute, Precision Medicine Initiative, and the Columbia Nano Initiative. Guided by its strategic vision, “Columbia Engineering for Humanity,” the School aims to translate ideas into innovations that foster a sustainable, healthy, secure, connected, and creative humanity.