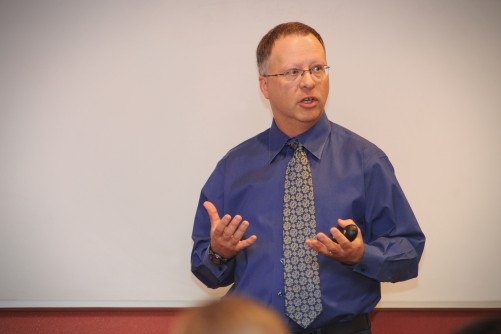 His accomplishments were recognized by the university at a Scholarly Excellence Rally held April 24.

Shuster is an associate biology professor in the College of Arts and Sciences. He has received $813,171 from the National Science Foundation to study “G protein regulation of the actin cytoskeleton in the cleavage stage embryo.” His other grant of $426,500 is from the Eunice Kennedy Shriver National Institute of Child Health and Human Development, one of the National Institutes of Health, for a project titled “Spindle orientation along the development axes in echinoderm embryos.

As he explained, the two projects are similar in that they seek to understand how the cytoskeleton (the internal skeleton of the cell) is regulated during cell division in the early embryo.

“I study the regulation and mechanics of cell division,” Shuster said. “Since all living organisms (bacteria, fungi, plants, animals) are made of cells, cell division is one of the most fundamental aspects of life on earth. Cells must accurately duplicate or replicate their genome, and then accurately separate those replicated chromosomes into the daughter cells, such that each daughter cell receives a full genomes’ complement of chromosomes. Thus, understanding how this process works is a key to understanding the process of life itself.” From a biomedical perspective, proper cell division is essential to development and survival, he added, as mistakes in cell division are frequently lethal to the developing fetus, as well as a destabilizing factor in cancer.

The aim of the NSF project, specifically, is to understand how cell shape change is regulated during cell division, a process critical to development and survival of all organisms. At the end of cell division, the dividing cell forms two daughter cells in a process called cytokinesis. The cytoskeletal proteins that physically pinch the cell in two are called actin and myosin, and these are the same proteins that help muscle cells contract and for cells such as white blood cells crawl to a site of infection. During cell division, actin and myosin form a structure called the contractile ring, which physically pinches the cell in two.

Actin and myosin are regulated by a family of regulatory proteins known as G proteins. “G proteins act as molecular switches,” Shuster said. “When they are ‘on,’ they can direct a number of processes and when they get shut ‘off,’ these processes shut down.

“This project seeks to understand how G proteins promote or inhibit the placement and formation of the contractile ring (where myosin generates tension against the actin filaments for cell division). We can make mutations in these proteins that permanently lock them in an activated or inactive state, and then investigate what happens to the contractile ring in living cells.”

This project is in collaboration with Dickinson College Professor John Henson. Shuster and Henson will spend summers working at the Marine Biological Laboratory in Woods Hole, Massachusetts.

The purpose of Shuster’s NIH project is to understand the regulation of cell division within the context of early development.

After fertilization, an egg splits into two cells and each individual cell continues to divide. The divisions occur in precise patterns yielding daughter cells containing different components from the original egg. This differential inheritance of egg cytoplasm will help determine what tissues these cells will give rise. Thus, the spatial orientation of these cell divisions is essential for proper development

On both projects, Shuster will employ the eggs and embryos of echinoderms such as sea stars, sand dollars and sea urchins. These organisms are ideal because they generate a large amount of gametes, and they divide very rapidly.

“In these experiments we microinject eggs with proteins that are fusions between the protein interest and a protein from jellyfish called Green Fluorescent Protein,” he explained. “GFP glows green when illuminated with blue light, and using recombinant DNA technology, we can fuse GFP to any protein, and then reintroduce the protein back into the cell.

“Using this technique, we can visualize microtubules, actin, and G proteins in a live dividing cell. Thus when we disrupt the function, we can observe their effects by using GFP markers for those cytoskeletal filaments.”

The NSF project will receive the funding over three years, while the NIH study will be funded through 2018.

To date, Shuster has had more than 50 students contribute to his lab research.

To learn more about his work, visit http://biology-web.nmsu.edu/~shuster-lab/.