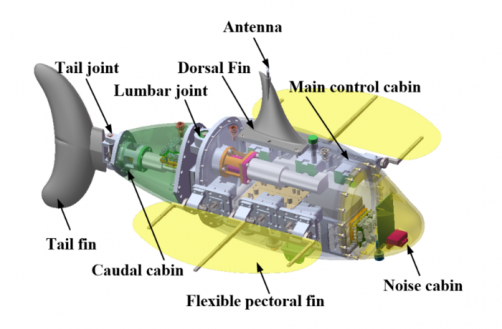 Scientists from Institute of Automation, Chinese Academy of Science

Newswise — Underwater robots are being widely used as tools in a variety of marine tasks. The RobDact is one such bionic underwater vehicle, inspired by a fish called Dactylopteridae known for its enlarged pectoral fins. A research team has combined  computational fluid dynamics and a force measurement experiment to study the RobDact, creating an accurate hydrodynamic model of the RobDact that allows them to better control the vehicle.

The team published their findings in Cyborg and Bionic Systems on May 31, 2022.

In recent years, researchers have worked to create underwater robots that mimic living creatures. These bionic vehicles move through the water similar to the ways fish or manta ray move. Compared with traditional underwater propulsion vehicles, these bionic underwater vehicles operate more efficiently and robustly in the water, while being environmentally friendly.

Underwater robots are affected by the surrounding fluid as they move through the water. This phenomenon is call the hydrodynamic effect. While moving in the water, the robot must deal with unknown water flow and force, which can cause unnecessary changes in the robot’s position.

To better control the robot, researchers need a more accurate hydrodynamic model. Creating this model is usually very complex and difficult. In addition, the real underwater environment is changeable and difficult to predict, so the model parameters can shift with a change in the environment. Researchers have been using computational fluid dynamics to create hydrodynamic models for underwater robots. However, the models created with computational fluid dynamics alone are not as precise and practical as they need to be. To overcome this challenge, the research team tried a different approach. “To make the hydrodynamic model more accurate and practical, we combined the computational fluid dynamics and a force measurement experiment,” said Rui Wang, a researcher at the Institute of Automation, Chinese Academy of Sciences.

Using computational fluid dynamics, the researchers identified the parameters in the hydrodynamic model. Then they developed a force measurement platform to obtain the force generated by the RobDact vehicle. With this process, they could obtain both the disturbing force and the force generated by the RobDact in any complex environment. “This could help us have a better understanding of the underwater vehicle’s motion state, and control the underwater vehicle more accurately,” said Qiyuan Cao, a researcher at the Institute of Automation, Chinese Academy of Sciences.

With their experiment, the team was able to determine the hydrodynamic force of the RobDact at different speeds. The force measurement platform they developed allowed them to measure the force of RobDact in the X, Y, and Z direction. They established a mapping relationship between the RobDact fluctuation parameters and the thrust of the vehicle through their force measurement experiments. By merging the rigid body dynamic model of RobDact with the thrust mapping model, the researchers were able to develop an accurate and practical hydrodynamic model of the RobDact’s in varying motions.