Biotech fit for the Red Planet 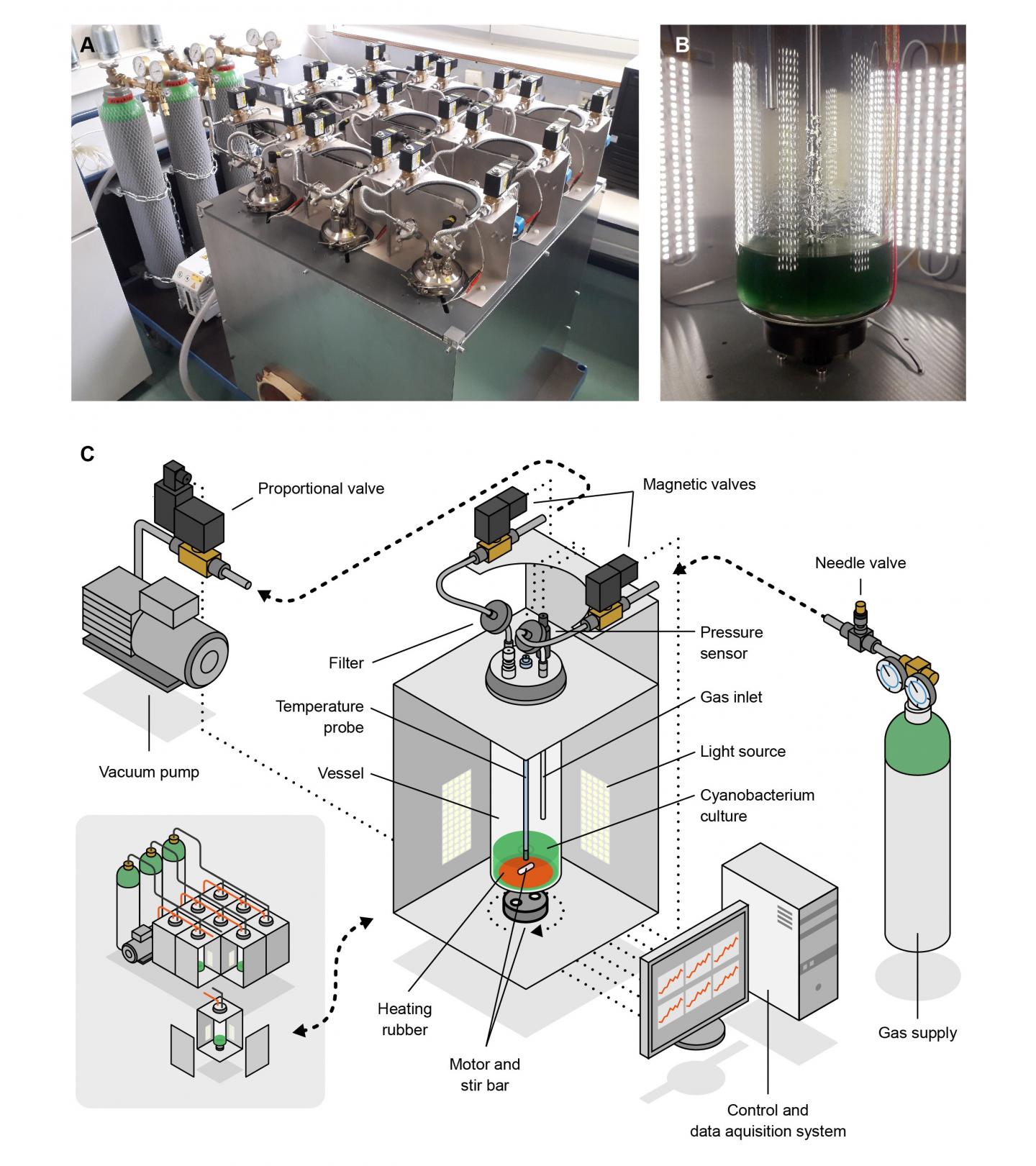 Newswise — NASA, in collaboration with other leading space agencies, aims to send its first human missions to Mars in the early 2030s, while companies like SpaceX may do so even earlier. Astronauts on Mars will need oxygen, water, food, and other consumables. These will need to be sourced from Mars, because importing them from Earth would be impractical in the long term. In Frontiers in Microbiology, scientists show for the first time that Anabaena cyanobacteria can be grown with only local gases, water, and other nutrients and at low pressure. This makes it much easier to develop sustainable biological life support systems.

"Here we show that cyanobacteria can use gases available in the Martian atmosphere, at a low total pressure, as their source of carbon and nitrogen. Under these conditions, cyanobacteria kept their ability to grow in water containing only Mars-like dust and could still be used for feeding other microbes. This could help make long-term missions to Mars sustainable," says lead author Dr Cyprien Verseux, an astrobiologist who heads the Laboratory of Applied Space Microbiology at the Center of Applied Space Technology and Microgravity (ZARM) of the University of Bremen, Germany.

Cyanobacteria have long been targeted as candidates to drive biological life support on space missions, as all species produce oxygen through photosynthesis while some can fix atmospheric nitrogen into nutrients. A difficulty is that they cannot grow directly in the Martian atmosphere, where the total pressure is less than 1% of Earth's - 6 to 11 hPa, too low for the presence of liquid water - while the partial pressure of nitrogen gas - 0.2 to 0.3 hPa - is too low for their metabolism. But recreating an Earth-like atmosphere would be expensive: gases would need to be imported, while the culture system would need to be robust - hence, heavy to freight - to resist the pressure differences: "Think of a pressure cooker," Verseux says. So the researchers looked for a middle ground: an atmosphere close to Mars's which allows the cyanobacteria to grow well.

To find suitable atmospheric conditions, Verseux et al. developed a bioreactor called Atmos (for "Atmosphere Tester for Mars-bound Organic Systems"), in which cyanobacteria can be grown in artificial atmospheres at low pressure. Any input must come from the Red Planet itself: apart from nitrogen and carbon dioxide, gases abundant in the Martian atmosphere, and water which could be mined from ice, nutrients should come from "regolith", the dust covering Earth-like planets and moons. Martian regolith has been shown to be rich in nutrients such as phosphorus, sulphur, and calcium.

Atmos has nine 1 L vessels made of glass and steel, each of which is sterile, heated, pressure-controlled, and digitally monitored, while the cultures inside are continuously stirred. The authors chose a strain of nitrogen-fixing cyanobacteria called Anabaena sp. PCC 7938, because preliminary tests showed that it would be particularly good at using Martian resources and helping to grow other organisms. Closely related species have been shown to be edible, suitable for genetic engineering, and able to form specialized dormant cells to survive harsh conditions.

Verseux and his colleagues first grew Anabaena for 10 days under a mixture of 96% nitrogen and 4% carbon dioxide at a pressure of 100 hPa - ten times lower than on Earth. The cyanobacteria grew as well as under ambient air. Then they tested the combination of the modified atmosphere with regolith. Because no regolith has ever been brought from Mars, they used a substrate developed by the University of Central Florida (called "Mars Global Simulant") instead to create a growth medium. As controls, Anabaena were grown in standard medium, either at ambient air or under the same low-pressure artificial atmosphere.

The cyanobacteria grew well under all conditions, including in regolith under the nitrogen- and carbon dioxide-rich mixture at low pressure. As expected, they grew faster on standard medium optimized for cyanobacteria than on Mars Global Simulant, under either atmosphere. But this is still a major success: while standard medium would need to be imported from Earth, regolith is ubiquitous on Mars. "We want to use as nutrients resources available on Mars, and only those," says Verseux.

Dried Anabaena biomass was ground, suspended in sterile water, filtered, and successfully used as a substrate for growing of E. coli bacteria, proving that sugars, amino acids, and other nutrients can be extracted from them to feed other bacteria, which are less hardy but tried-and-tested tools for biotechnology. For example, E. coli could be engineered more easily than Anabaena to produce some food products and medicines on Mars that Anabaena cannot.

The researchers conclude that nitrogen-fixing, oxygen-producing cyanobacteria can be efficiently grown on Mars at low pressure under controlled conditions, with exclusively local ingredients.

Further refinements in the pipeline

These results are an important advance. But the authors caution that further studies are necessary: "We want to go from this proof-of-concept to a system that can be used on Mars efficiently," Verseux says. They suggest fine-tuning the combination of pressure, carbon dioxide, and nitrogen optimal for growth, while testing other genera of cyanobacteria, perhaps genetically tailored for space missions. A cultivation system for Mars also needs to be designed:

"Our bioreactor, Atmos, is not the cultivation system we would use on Mars: it is meant to test, on Earth, the conditions we would provide there. But our results will help guide the design of a Martian cultivation system. For example, the lower pressure means that we can develop a more lightweight structure that is more easily freighted, as it won't have to withstand great differences between inside and outside," concludes Verseux.

The project was funded by the Alexander von Humboldt Foundation.