Biotechnology: Enzymes in a Cage 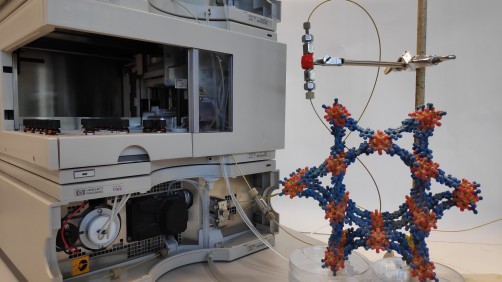 3D model of a MOF in front of the enzyme-MOF flow reactor at the laboratory of KIT’s Institute of Functional Interfaces. 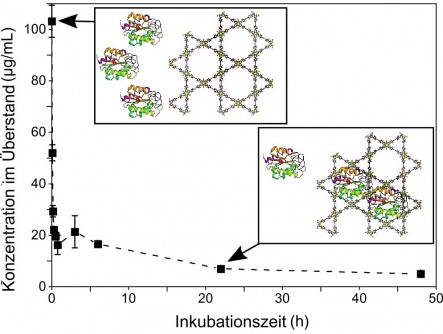 The huge biomolecules diffuse individually into the tightly fitting pores of a metal-organic framework.

Newswise — When used as biocatalysts, enzymes accelerate many chemical reactions. At Karlsruhe Institute of Technology (KIT), researchers have now embedded enzymes in metal-organic cages (MOFs). For the first time, they then demonstrated that stabilization by these frameworks is sufficient for use of the enzymes in a continuous reactor. Moreover, the enzymes embedded in the MOFs cannot only be used in aqueous, but also in organic solvents. The researchers report in the journal Angewandte Chemie (DOI: 10.1002/anie.202117144).

Enzymes are considered true multi-functional talents. They accelerate many chemical reactions as catalysts. In organisms, they are involved in vital processes. In technology and industry, they can be used as tools of white biotechnology and help save energy and resources. Enzymes in detergents, for instance, detach dirt at low temperatures already. Enzymes are also applied in environmental technology, food processing, medicine production, medical diagnostics, and many other branches.

Enzymes mostly represent proteins. To use the potential of these huge molecules in so-called cell-free biotechnology, they have to be stabilized and integrated in efficient reactor systems. This has already been achieved quite often in aqueous solvents. In organic solvents, by contrast, destabilization or denaturation occurs and catalytic properties are lost.

Researchers from KIT’s Institute of Functional Interfaces (IFG), Institute of Nanotechnology, and Institute for Biological Interfaces 1 – Biomolecular Micro- and Nanostructures have now succeeded in stabilizing enzymes such that they can be used in both aqueous and organic solvents. For the first time, they demonstrated a continuous enzyme reactor system of high productivity and stability. This is reported in the journal Angewandte Chemie.

The innovative reactor system is based on metal-organic frameworks (MOFs). These consist of metallic nodes and organic connecting rods and have crystalline structures with defined pore sizes. Using different combinations of metal building blocks and organic ligands as well as various pore sizes, MOFs can be customized for various applications. In the case of cell-free use, enzymes act like cages. “We make the enzymes diffuse individually into the pores of the MOFs, that is they enter the cage voluntarily,” says Professor Christof Wöll, Head of IFG. “The MOFs act as an armor and protect the sensitive biomolecules from denaturation.” Thanks to the porosity of the MOFs, transport of reactants, i.e. of the substances consumed and products resulting during the reactions, can be controlled better. Moreover, MOFs facilitate complex separation of catalyst and products, says Professor Matthias Franzreb, Deputy Head of IFG and co-author of the study.

KIT researchers demonstrated time- and cost-efficient manufacture of an enzyme-MOF flow reactor. Stability of the immobilized enzyme was about 30 times that of the free enzyme. Catalytic activity reached about 30 percent of that of a free enzmye – a rather high value in view of the deformation of the enzyme embedded in the MOF pores. The study was made in connection with the Cluster of Excellence “3D Matter Made to Order” of KIT and Heidelberg University as well as under the Helmholtz Program “Materials Systems Engineering.” In future, MOFs will be modified with the help of computer-based methods such that deformation by the pores increases activity rather than reducing it.

Being “The Research University in the Helmholtz Association”, KIT creates and imparts knowledge for the society and the environment. It is the objective to make significant contributions to the global challenges in the fields of energy, mobility, and information. For this, about 9,800 employees cooperate in a broad range of disciplines in natural sciences, engineering sciences, economics, and the humanities and social sciences. KIT prepares its 22,300 students for responsible tasks in society, industry, and science by offering research-based study programs. Innovation efforts at KIT build a bridge between important scientific findings and their application for the benefit of society, economic prosperity, and the preservation of our natural basis of life. KIT is one of the German universities of excellence.