Birds Are Coming Through: Time to Switch Off the Lights

Turn off non-essential lights to protect birds during spring migration

American Redstart killed by colliding with a building. 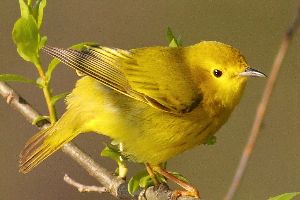 Newswise — Ithaca, NY—The biggest window of opportunity is opening up now to protect birds returning to the United States and Canada on their spring migrations. Analyses by scientists at the Cornell Lab of Ornithology and Colorado State University pinpoint key periods with the heaviest movements of birds in April and May. Turning off or reducing non-essential lighting at homes, businesses, and high-rise buildings will help protect hundreds of millions of birds migrating over brightly lit cities.

"Our studies have consistently shown that birds are attracted to artificial light at night," said Andrew Farnsworth, the scientist who heads the Cornell Lab's BirdCast project which forecasts intensities of migratory bird movements each spring and fall. "Bright lights from buildings, especially those in cities taller than two stories, can attract and disorient nocturnal migrants, interrupting migration and leaving birds more susceptible to deadly collisions with buildings."

As many as 1 billion birds die from building collisions every year, especially during migration when large numbers of birds are on the move. Turning out the lights during those most intensive periods can help prevent collisions. The table below shows the most crucial periods, when 50% of the total number of birds on spring migration is likely to be in the air in the top 10 cities with the most light pollution.

These "windows" reflect averages from multiple years and can vary slightly from year to year.
*Cities with Lights Out programs
Source: Bright lights in the big cities: migratory birds’ exposure to artificial light. Frontiers in Ecology and the Environment. 2019.

Some cities have adopted Audubon Lights Out programs to help save birds. Chicago, ranked as the number one city exposing migratory birds to light pollution, has embraced the Lights Out movement for more than a decade. More than 90% of Chicago’s downtown high-rise buildings now turn out their lights during spring and fall migration.

BirdCast forecasts include migration maps that use models that can predict up to three days in advance which nights will feature more intense migration. You can sign up for emails from BirdCast (birdcast.info) to get these forecasts. Colorado State University’s AeroEco Lab website lets visitors know when to turn out the lights in 144 cities to make migration safer for birds (aeroecolab.com/cityalerts).

"We are able to make targeted, data-driven lights-out alerts for major cities across the United States," said collaborator Kyle Horton, an assistant professor at Colorado State University. "Alerts target nights with especially high migratory activity, when the majority of migrants will pass, probably representing only 7 to 10 critical nights each season."

Cornell Lab researchers used more than 20 years of weather radar data, which contain information about migrating birds, to pinpoint nights when, on average, migration intensity and frequency are highest in specific regions.

Editors: Download images. The use of this material is protected by copyright. Use is permitted only within stories about the content of this release. Redistribution or any other use is prohibited without express written permission of the Cornell Lab of Ornithology or the copyright owner.

Caption: American Redstart killed by colliding with a building.