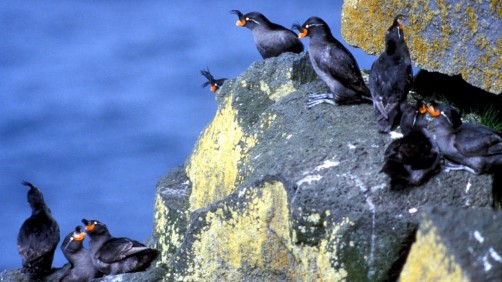 Newswise — A recurring theme in nature documentaries is that of choosy females selecting brightly colored males. A new study shows that, in monogamous mating systems, male birds may select their lifelong mates in much the same way.

Some traits, such as the tuft of feathers atop a crested auklet, signal attractiveness to the other sex and competitive rank within the same sex. Research has traditionally focused on male competition for access to females or territory and on females choosing males based on their feathers and fights. But recent investigations suggest that females not only compete with each other, but also rely on such traits in deciding whether to engage or defer. Accordingly, “the idea has been floated that these traits could then become preferred by males,” says Caitlin Stern, a research fellow at the Santa Fe Institute, “because they indicate that a female is successful in competing for resources.”

To find out, Stern created population genetic models involving females with or without a given trait and males with or without a preference for it. “It has historically been a challenge to understand how mating preferences for ornamental traits can evolve when every individual succeeds in getting a mate,” Stern explains, in part because the seemingly simple selection process of monogamous pairs, where mates couple up and remove themselves from the broader gene-swapping pool for good, is tricky to handle mathematically. Nevertheless, over thousands of generations, both the female trait and male preference persisted in the population, suggesting that both are favored.

The study, published this week in Ecology and Evolution, is a proof of concept that “preference for a trait used in same-sex competition is a way for preference to evolve in monogamous species,” Stern says. “Mate choice can go both ways.”