The iconic 'look' did not start with dinosaurs 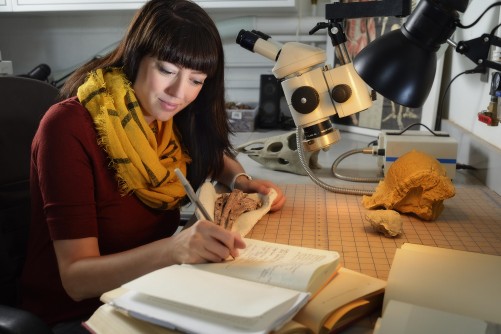 Michelle Stocker, a paleontologist at Virginia Tech, led a multi-institutional team that discovered a new species of reptile that predates dinosaurs, but had the classic dinosaur-look. 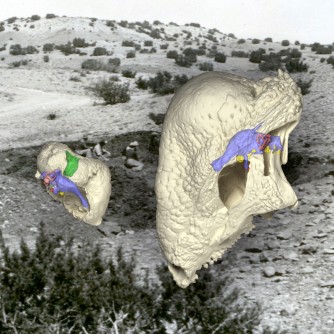 The preserved remains of Triopticus (left) show the evolution of a thickened domed skull in the Triassic Period, 150 million years before the evolution of the famous dome-headed pachycephalosaur dinosaurs, such as Stegoceras (right). The background image shows the field site in Texas where Works Progress Administration crews in 1940 found the curious fossils of Triopticus.

Newswise — Iconic dinosaur shapes were present for at least a hundred million years on our planet in animals before those dinosaurs themselves actually appeared.

In a study in today’s (Sept. 22) issue of Current Biology, a multi-institutional team of paleontologists including Virginia Tech College of Science researcher Michelle Stocker have identified and named a new species of extinct reptile estimated to be 230 million years old – predating dinosaurs.

Called Triopticus primus — meaning the “First of Three Eyes” because the large natural pit in the top of its head lends the appearance of an “extra”eye — Triopticus bears an extremely thickened skull roof, just like the very distantly related pachycephalosaur dinosaurs that lived more than 100 million years later. And even more unexpected, many of the other extinct animals found with Triopticus resemble later dinosaurs as well.

“Triopticus is an extraordinary example of evolutionary convergence between the relatives of dinosaurs and crocodylians and later dinosaurs that is much more common than anyone ever expected,” Stocker said. “What we thought were unique body shapes in many dinosaurs actually evolved millions of years before in the Triassic Period, about 225 million years ago.”

Convergence — where distantly related animals evolve to look very similar to each other— is a widely-recognized phenomenon in evolutionary biology. A classic example of this is a bird wing and a bat wing — both animals use their wings for flight, but the inner details of those wings are different and evolved independently.

Many of the other Triassic reptiles buried with Triopticus in the Otis Chalk fauna display structures that are easily recognized in later dinosaurs as well, such as the long snouts of Spinosaurus, the toothless beaks of ornithomimids, and the armor plates of ankylosaurs. Researchers said it is extremely rare to have so many diverse species in a single ancient community be converged upon over a broad swath of later geologic time.

“The Otis Chalk fauna is an amazing single snapshot of geologic time where you have this extraordinary range of animal body plans all present at the same time living together,” Stocker said. “Among the animals preserved in the Otis Chalk fauna, Triopticus exemplifies this phenomenon of body-shape convergence because its skull shape was repeated by very distantly-related dome-headed dinosaurs more than 100 million years later.”

Dinosaurs, like these distant cousins from the Triassic Period, are all reptiles. Reptiles rapidly evolved in terms of numbers of species soon after the greatest mass extinction of all time on Earth, at the end of the Permian Period.

“After the enormous mass extinction 250 million years ago, reptiles exploded onto the scene and almost immediately diversified into many different sizes and shapes. These early body shapes were later mimicked by dinosaurs,” said Sterling Nesbitt, an assistant professor of paleontology at Virginia Tech and co-author of the study. The mimicry in body shape appears to evolve only after the extinction of the first group of reptiles.

Researchers said an important component of the study involved the use of CT technology, more commonly associated with patients, not fossils.

The specimen underwent a detailed CT scan at The University of Texas at Austin in order to reconstruct the brain anatomy, which had been rotted away millions of years ago when the animal was fossilized.

“This project combines both old-school and high-tech approaches,” said co-author Lawrence Witmer of Ohio University’s Heritage College of Osteopathic Medicine. “Careful excavation and cleaning of the fossils showed the team that we had something special in Triopticus, but being able to peer inside the skull with X-ray CT scanning was a game-changer.”

Not only is the external skull shape of Triopticus eerily reminiscent of the dome-headed dinosaurs, the internal parts of its head followed suit.

“CT scanning showed us that the similarity of Triopticus with the much later dome-headed pachycephalosaur dinosaurs was more than skin deep, extending to the structure of the bone and even the brain.” Witmer said.

“With a combination of CT scans and fossil comparisons we were able to give this old fossil new life,” said Katharine Criswell, a co-author and doctoral student at the University of Chicago.

Complete details of what Triopticus primus looked like and how big it was are not yet known, though it was likely no bigger than an alligator. For now, researchers only have a fragment of skull. The remainder of the face and jaw, the vertebrae, and the rest of the skeleton is missing, either long lost to natural elements, waiting to be found in the field still, or inside a plaster jacket not yet opened at the lab at UT Austin.

Though many fossils are uncovered during long stints of dusty fieldwork in far-off places, the team’s discovery of this specimen — originally collected near Big Spring, Texas, by the Works Progress Administration in 1940 — happened in the Texas Vertebrate Paleontology Collections in 2010, where it had been lying in plain sight for 70 years.

It is not uncommon for new species to be found in fossil ‘libraries’ around the world. The Works Progress Administration, part of Franklin D. Roosevelt’s monumental effort to put Americans back to work at end the Great Depression, found so many fossils during its short span of work that they didn’t have time to clean all of them.

“We can gain new insights into the history of life because specimens like Triopticus have been curated into museum collections like the one at UT Austin,” said Matthew Brown, co-author and director of the Texas Vertebrate Paleontology Collections at The University of Texas at Austin. “These collections are the foundation of natural history research, and this new animal illustrates how exciting discoveries are continually made thanks to the forethought and investment of past generations. It will be fascinating to see what the students of tomorrow find next.” 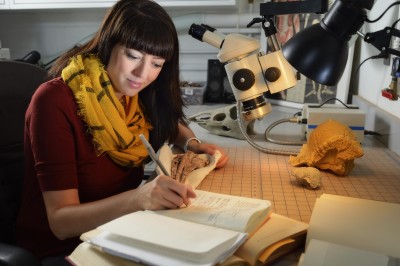 Caption: Michelle Stocker, a paleontologist at Virginia Tech, led a multi-institutional team that discovered a new species of reptile that predates dinosaurs, but had the classic dinosaur-look. 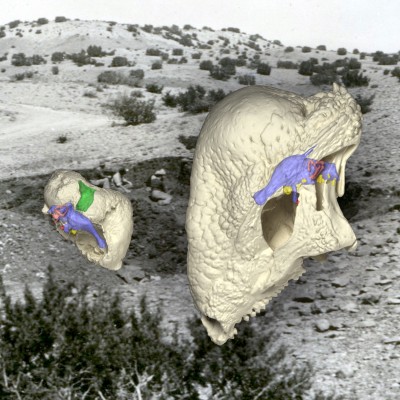 Caption: The preserved remains of Triopticus (left) show the evolution of a thickened domed skull in the Triassic Period, 150 million years before the evolution of the famous dome-headed pachycephalosaur dinosaurs, such as Stegoceras (right). The background image shows the field site in Texas where Works Progress Administration crews in 1940 found the curious fossils of Triopticus.