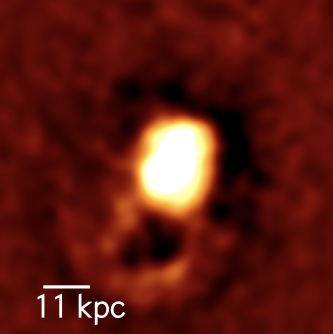 Newswise — LEXINGTON, Ky. (June 15, 2022) — Valeria Olivares, a postdoctoral scholar in the University of Kentucky Department of Physics and Astronomy, will present results from a study which examined the activity of black holes at the center of galaxy clusters. The findings will be presented today during the American Astronomical Society’s (AAS) semiannual meeting, taking place in Pasadena, California this week.

Using images from NASA’s space-based X-Ray observatory, Chandra, Olivares’ team discovered that the interactions between super massive black holes and their host galaxies, or galaxy clusters, are remarkably similar for systems that are nearby and very distant from us. The results provide evidence that these interactions have been in place, and only evolved mildly, for billions of years.

Olivares says the findings will set critical constraints on forthcoming models and simulations of galaxies and galaxy clusters.

“Our finding, contrary to what we thought, provides strong evidence of a lack of evolution of the black hole feedback over the 8 billion years in central cluster galaxies,” Olivares said. “This is an important piece in the puzzle that can be used to improve upcoming simulations of galaxy clusters. It also opens the door to future observations of clusters that can help us confirm if our finding holds for even more distant clusters.”

Olivares will reveal these results at 2:15 p.m. PDT Wednesday, June 15, in her briefing, titled “Black Hole Activity Is Not Evolving in Central Cluster Galaxies.”

The research study, “AGN feedback in the Planck selected Clusters using Chandra observations: a detailed study of X-ray cavities,” has been submitted to the Monthly Notices of the Royal Astronomical Society of Letters.

The press briefing may be watched live on AAS Press Office YouTube channel.

As the largest astronomy conference in the United States, the AAS meeting will bring together more than 2,000 astronomers, educators, students and journalists to highlight the nation’s most groundbreaking work in the fields of physics and astronomy.

The American Astronomical Society (AAS), established in 1899, is a major international organization of professional astronomers, astronomy educators and amateur astronomers. Its membership of approximately 8,000 also includes physicists, geologists, engineers and others whose interests lie within the broad spectrum of subjects now comprising the astronomical sciences. The mission of the AAS is to enhance and share humanity’s scientific understanding of the universe as a diverse and inclusive astronomical community, which it achieves through publishing, meetings, science advocacy, education and outreach, and training and professional development.