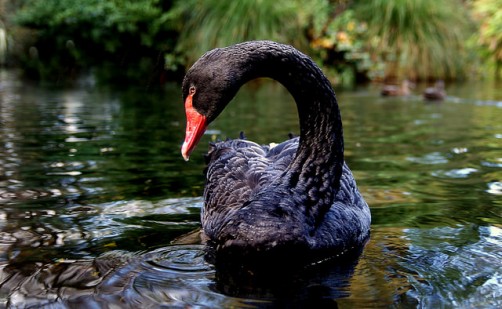 A black swan, which breeds mainly in the southeast and southwest regions of Australia. 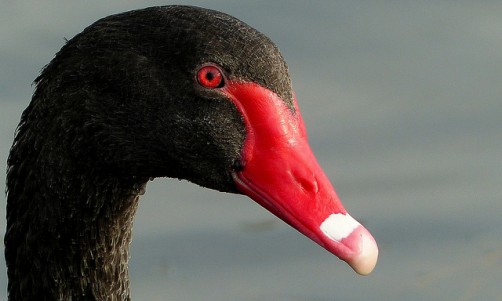 Newswise — Black swan events are rare and surprising occurrences that happen without notice and often wreak havoc on society. The metaphor has been used to describe banking collapses, devastating earthquakes and other major surprises in financial, social and natural systems. A new analysis by the University of Washington and Simon Fraser University is the first to document that black swan events also occur in animal populations and usually manifest as massive, unexpected die-offs. The results will appear online March 7 in the Proceedings of the National Academy of Sciences. "No one has really looked at the prevalence of these black swan events in animal population abundance before," said lead author Sean Anderson, a UW postdoctoral researcher in aquatic and fishery sciences. "People associate the phrase with financial market crashes, and being able to take that term and apply it to another system gives context about what we're seeing in animal populations."

The researchers analyzed data from more than 600 animal populations, including mammals, birds, fishes and insects. They found that drastic changes in populations occurred in about 4 percent of the animals they surveyed, most commonly in birds.

Almost always, these black swan events came as massive, unexpected population crashes or die-offs, instead of positive surges in population, the analysis found. Current methods to look at a species' extinction risk don't take into account the impact of a black swan event ― and probably should, the researchers argue.

"Everyone just assumes an animal population has an equal chance of going up or down, but we've found that isn't true," said co-author Trevor Branch, a UW associate professor of aquatic and fishery sciences. "My hope is that when people are trying to assess extinction risk, they will use different models that project into the future in a more accurate way."

Anderson and colleagues developed a method to detect black swan events over time in different species. They found that most occurrences were driven by factors such as parasites, severe winters, predators or climate ― most of which will likely get more extreme under climate change.

"I would expect climate change to make black swan events even more important," Anderson said. "We expect an increase in the frequency and magnitude of extreme climate, and it's quite possible we will see black swan events become more common in animal populations."

About two years ago, more than a third of the world's population of saiga antelopes died in just a few days. Researchers later determined that a bacterial infection was behind the deaths of the endangered antelopes in Kazakhstan. It's a classic example of a black swan event impacting animals, the authors say.

Other examples included in their analysis are England's grey heron population crashes in the mid-1900s as the result of cold winters; European shag cormorants' decline from a red tide event in the late 1960s; and Scotland's red grouse collapse in the 1970s due to parasite outbreaks and fox predators. Each of these events caught managers by surprise.

The researchers say the goal is not to try to predict black swan events, but instead to prepare for them by developing management plans that help populations withstand sudden, dramatic swings. For example, managing animal populations so they remain large enough to accommodate crashes ― or maintaining diversity within a population ― could help buffer against black swan disasters.

The earthquake preparedness movement across seismically active regions is a good example of how to buffer against the unexpected, the researchers say. Adding a cushion for extreme events in animal populations could be the difference between a species taking a severe dive or going completely extinct.

"The question of extreme events is really hard to address, yet it's a really interesting, relevant topic. You need a massive amount of data and a good analysis to do this in animal populations," Branch said. "There's no bigger dataset to look at and no better method to detect black swan events than this."

The study's other co-authors are Andrew Cooper and Nicholas Dulvy of Simon Fraser University.

The analysis relied on data from the Global Population Dynamics Database. The research was funded by a David H. Smith Conservation Research Fellowship; the Natural Sciences and Engineering Research Council of Canada; the Canada Research Chairs Program; and the Richard C. and Lois M. Worthington Endowed Professorship in Fisheries Management. 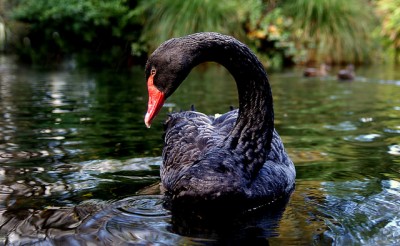 Caption: A black swan, which breeds mainly in the southeast and southwest regions of Australia. 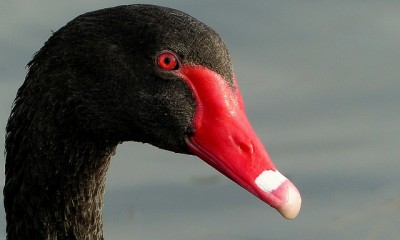 Proceedings of the National Academy of Sciences, March-2017