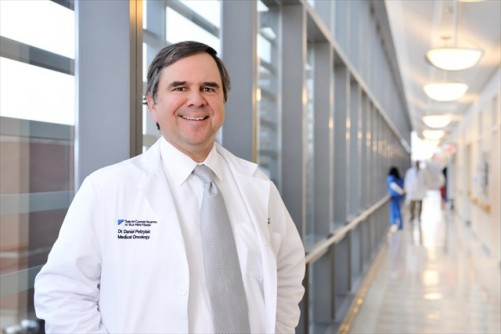 Newswise — The FDA approval of Tecentriq ushered in the first new treatment for advanced bladder cancer in 30 years. The drug works by binding to PD-L1, a protein that’s found on some tumor cells and is known as an “immune checkpoint,” because it prevents the immune system’s T cells from destroying tumors. By inhibiting this checkpoint, the drug allows the T cells to recognize tumor cells as foreign invaders and kill them.

In the clinical trial that led to the approval, the drug led to tumor shrinkage in 14.8 percent of the patients treated. The responses were most prevalent in patients whose tumors showed high levels of PD-L1 — 26 percent of those patients responded, versus 9.5 percent with low levels of the protein — but the drug was approved for all patients who had progressed on previous therapies.

Side effects of Tecentriq can include fatigue, nausea, diarrhea, itching, rash, shortness of breath, urinary or intestinal obstruction, kidney injury and pneumonia.

Checkpoint inhibitors had previously been shown to work well in select cancers, most notably melanoma and some types of kidney and lung cancers, so oncologists are encouraged by the early signal from Tecentriq that they might also offer new hope in bladder cancer.

“Before this approval, there was really no standard regimen for patients who (progressed on) prior chemotherapy for bladder cancer,” says Daniel Petrylak, M.D., professor of medical oncology and urology at Yale University. “This is a very aggressive disease. Most patients respond and then progress, or they never have any response to chemotherapy. That’s why we’re so excited about Tecentriq.”

Several other drugs that target PD-L1 and a related immune checkpoint, PD-1, also looks promising in clinical trials in bladder cancer. In February 2016, the FDA granted breakthrough therapy designation to durvalumab, meaning that the agency will expedite its review of the PD-L1 inhibitor that sparked a response rate of 31 percent in a phase 1/2 trial of patients with advanced urothelial bladder cancer. Among patients whose tumors expressed high levels of PD-L1, the response rate rose to 46 percent. Side effects were mostly mild and included fatigue, gastrointestinal issues and fever. Several additional studies are being planned for the drug, including one that will combine durvalumab with tremelimumab, a drug that inhibits another immune checkpoint called CTLA-4.

Keytruda (pembrolizumab), a PD-1 inhibitor that’s already approved to treat metastatic melanoma, metastatic non–small cell lung cancer and recurrent or metastatic head and neck cancer, is also being tried in bladder cancer — both alone and in combination with chemotherapy. In an early trial, the drug given by itself produced a 25 percent response rate. High PD-L1 expression, which is often also used to predict response to PD-1 inhibition, did matter in this trial: 38 percent of patients with high levels of the protein responded.